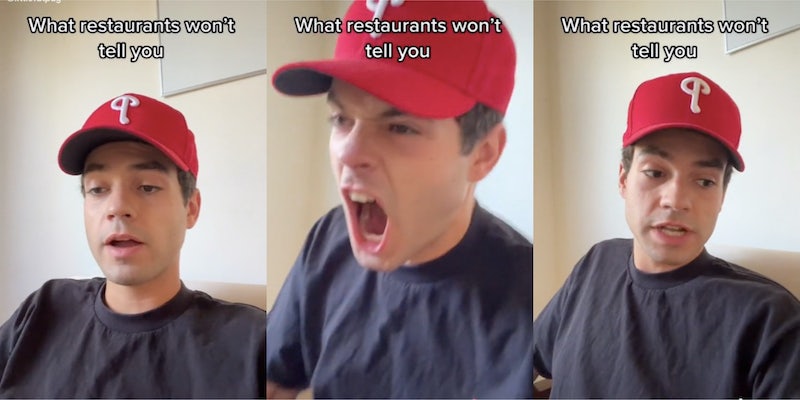 ‘Being a waiter, you lie to everyone’: Former waiter shares what restaurant workers won’t tell you

'We’re hanging out in the kitchen eating fries off of your plate.'

One TikToker is pulling back the curtain on people in the food service industry, from chefs to waiters.

TikTok user Malcolm Cills (@littlefatpug) posted a recent video recounting his experience working in the food service industry, revealing some of the less-than-ideal traits of the employees that customers may encounter.

“I used to be a waiter. I’ve been a barback, food runner, busboy. I even bartended a little bit, and let me just tell you guys some stuff. … Chefs usually hate customers,” Cills says.

He goes on to say some chefs easily get mad at the simplest request.

“I don’t know how to describe it, but any type of thing that comes back to the kitchen like ‘Oh, chef, can we get a little bit of mayo on the side? They asked for it.’ The chef will literally be like, ‘Fuck!’” he says.

He also says waiters mostly lie when asked about if they think a dish is good or not.

“If you ask us like, ‘Oh, is that healthy for you?’ I’m just gonna be like, ‘Yeah, it’s actually one of our healthiest options—total lie,” Cills says.

He also reveals that, while working at a five-star sushi restaurant in New York, he was told they should advise customers that their sushi is delivered every week, fresh from Japan.

“That shit came like maybe every two weeks,” Cills says. “I don’t know why, we just lie. Being a waiter you lie to everyone.”

Waiters also often indulge in the food they’re working around, sometimes stealing bites here and there, he says.

“All the waiters and all the staff, we’re hanging out in the kitchen eating fries off of your plate,” Cills says. “Normal thing, taking a fry [and] eat it off the plate. We eat a lot of the food. We steal stuff in the restaurant: food, a Tupperware.”

TikTok has become a hub for food service workers to relay their experiences about working in the industry—highlighting experiences such as struggling to find time to eat on the job and being bombarded with a high volume of online orders. According to the U.S. Bureau of Labor Statistics, more than five million people in 2021 work in the food service and drink industry, including waitstaff, people in food preparation (including fast food), and cooks.

Many of the commenters to Cill’s video seemed to relate to his experiences.

“I’m honestly over customers acting like they’re getting real quality food… this is an Applebees… what do you mean is the fish fresh …??” one commenter said.

“The cook at my bar will lose it when I ring in a large order like sir this LITERALLY your job ?? Did you want me to tell them no?” another commenter said.

One commenter said they disagreed with Cill’s claim about lying, saying customers appreciate it when you’re honest upfront.

“I’ve tried both and I swear customers appreciate it more if you are honest with them about the food and act like you’re getting them in on secrets,” they said.

Update 2:26pm CT October 28: In an Instagram direct message exchange with the Daily Dot, Cills explained that though his primary intention behind the video was to make viewers laugh, he also wanted users to reconsider their views of restaurant service workers.

“I wanted to make people second guess complaining next time they dine out,” he wrote. “Most people don’t realize that servers are people too. We forget that they have an entire life outside the restaurant that may make them feel all types of emotions. But despite any outside distraction, stressors, and flat-out BS they endure—we still count on them to put on a smile, answer all of our questions and deliver a enjoyable dining experience.”