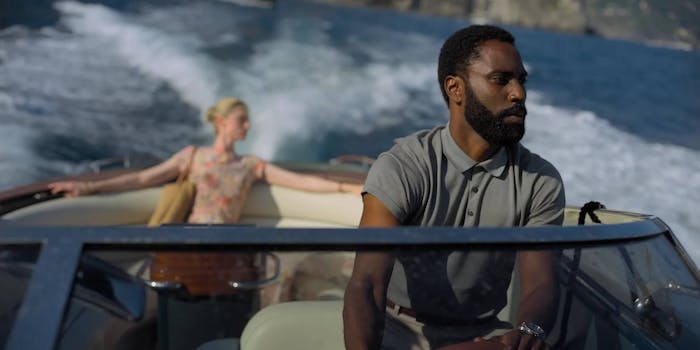 What is Christopher Nolan’s new movie ‘Tenet’ actually about?

Is it a time travel movie? Robert Pattinson says no. We say maybe.

Christopher Nolan has been meticulously secretive about his next movie, Tenet, which is due out (in theory!) on July 17. We only know a handful of details so far: It’s a spy thriller, the heroes are trying to prevent World War III, and it stars John David Washington, Robert Pattinson, and Elizabeth Debicki. An enigmatic trailer arrived in December, featuring some very cool action sequences and a vague suggestion of time travel. But in a new interview with GQ, Robert Pattinson said very firmly that there’s no time travel involved. So, what gives?

Pattinson’s GQ interview (which is, incidentally, a wild ride from start to finish) only touches on Tenet for a few paragraphs. He says he based his performance on controversial atheist philosopher Christopher Hitchens, and that he still doesn’t really know what the movie is about. It’s actually not uncommon for actors to claim ignorance of projects they’ve already filmed, because it’s an easy way to dodge questions while sounding cool and mysterious. So you can take some of Pattinson’s claims with a pinch of salt, especially in the context of this quote from Nolan, who was interviewed for the same piece:

“Rob’s read on the script was extremely acute. But he also understood the ambiguities of the film and the possibilities that spin off in the mind around the story. And so both things are true. Yes, he’s fucking with you, because he had a complete grasp of the script. But a complete grasp of the script, in the case of Tenet, is one that understands and acknowledges the need for this film to live on in the audience’s mind, and suggest possibilities in the audience’s mind. And he was very much a partner in crime with that.”

In other words, Chris Nolan would rather pull his own fingernails out than tell us what happens in Tenet. Which is fine! I genuinely love that Tenet remains shrouded in mystery. It’s a welcome reprieve from typical blockbusters where dozens of TV spots and trailers give away entire scenes and plot points. It’s also a blatant marketing trick that Nolan fans are falling for hook, line and sinker, because even if you don’t want to hear the tiniest grain of a spoiler… you still can’t help wondering what’s up. For instance, here’s what Pattinson said about his character:

“He’s not a time traveler. There’s actually no time traveling. [laughs] That’s, like, the one thing I’m approved to say.”

Now, this may just mean there’s no time-traveling for Pattinson’s character, who appears to be the second or third most important role after John David Washington, the protagonist. In the trailer, we see Washington being recruited by a spy organization that requires a “test” where he “dies” and returns to life. He works alongside Pattinson and a scientist (Clémence Poésy), hoping to prevent “something worse” than nuclear holocaust. And in several scenes, time appears to run backwards, most obviously when Washington inspects some bullet holes and says they “haven’t happened yet.” The main characters of Tenet seemingly have an ability to turn back time on a small scale, and may use that power to battle a global catastrophe. So it’s potentially more about bending time or branching linelines than traditional “time travel.” (If you really want to enter tinfoil hat territory, look closely at this promo photo, where Washington has a ghostly double-image hovering an inch behind him. In other circumstances, we’d assume it’s a photo error, but with Christopher Nolan, maybe it’s a subtle sign of a parallel timeline. Who knows!)

Even before the trailer arrived, Tenet‘s title (styled as TENƎꓕ, with the last two letters upside-down) held some clues. Tenet is the central word in a Sator Square, an ancient Latin word puzzle where each vertical and horizontal line can be read backward and forward. Sator squares are interpreted in a number of ways ranging from magical/religious symbolism to the basic fact that palindromes are fun, and you’ll find examples all over the place, dating as far back as pre-volcano Pompeii. The word “tenet” is a form of the verb “to hold” or “to keep.” It’s a palindrome in itself, and the Sator Square is an obvious analogy for a narrative that can be told in multiple directions.

Nolan is known for using nontraditional structures and timelines in his movies, including Memento (non-chronological storytelling), Inception and Dunkirk (where different elements unfold at different speeds), and Interstellar (where the main character experiences time dilation while inside a wormhole). A film where some characters move forward in time while others hit the rewind button is a natural step for Nolan. In fact, if Tenet turned out to structured in a traditional, linear fashion, it would be a genuine shock.