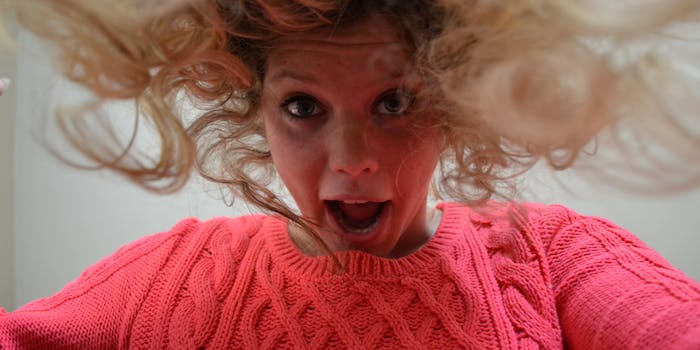 Thanks to gossip magazines, a selfie is no longer just a photo you take of yourself. It’s now any photo with a human in it.

Do we really have to clarify what is and isn’t a selfie?

Over the past year of hard-hitting selfie coverage, gossip mags have nonchalantly expanded the definition of the term. A selfie is no longer just a photo you take of yourself. It’s now any photo with a human in it.

I never imagined I’d be so eager to defend the integrity of an inane viral Internet thing, but this is unsettling. Calling a random celebrity photo a selfie is like burping into a trumpet, uploading it to Soundcloud, and then tagging it with #jazz to make sure people click on it.

#SelfieTruther curmudgeon Robert Kessler, a writer, is collecting screenshots of “selfies” that are actually professional photographs.

“This issue is probably the Benghazi of 2014,” he wrote in a Twitter DM. “The misuse of ‘selfie’ is so obviously because it’s an Internet buzzword and people will slap it on anything to get clicks.”

In each headline and caption, the term “selfie” is a stretch. At worst, the publication seems to have intentionally mislabeled the image to try to ride the buzz of a cultural phenomenon:

How do you take a trend that’s already booming and try to keep it fresh and exciting? Maybe by upping the ante, using it to break Twitter records. Or maybe by turning it so ubiquitous that its definition is pliable, and trusting that no one will notice or care.

But words carry implicit meaning, and that meaning matters to a whole lot of people. If you haven’t caught on that the selfie—like Snapchat and WhatsApp and other dumb things teenagers popularized—is an important cultural touchstone, you’re awfully stubborn.

The selfie has a reputation for being silly and vain, but it can actually be an empowering form of self-expression—for men and women and trans and genderqueer people, old and young, all across the Web. It’s a very pure and honest artistic pursuit to document your world by inserting yourself in it.

It always feels false when corporate empires try to co-opt organic Internet trends. Nothing is less funny than a brand using the Doge meme to try to sell you hemorrhoid cream.

“I get that the English language evolves,” says Kessler, “but it’s just silly to call any picture of yourself a selfie. Are Van Gogh’s self-portraits selfies?”

That’s a good question. Does a selfie have to be a photograph? Does it require an arm or a mirror in the shot? What if, like Ellen DeGeneres at the Oscars, you got someone with longer arms to take the photo for you: Is that selfie still your selfie?

Maybe it doesn’t matter, as long as you’re both the subject and the artist. “If I find a photo of myself and post that to Instagram, I’d still call that a selfie,” says a friend. In the little microcosm of Instagram, you’re the director of photography. You staged the image, framed yourself, and hung it up in the little room you inhabit on the Web. That’s why Ellen’s selfie is still Ellen’s Selfie, even though Bradley Cooper took it.

At risk of offending selfie purists, I’d argue that the shot of the woman with the lion might even be, in a sense, a selfie. It’s hard to take a photo of yourself when there’s a jungle cat nuzzling you. What’s wrong with asking a local to lend a hand?

But a Getty image republished on the Daily Mail doesn’t make the cut—unless DeGeneres’s byline is on the article. In which case I have a lot to talk to her about.