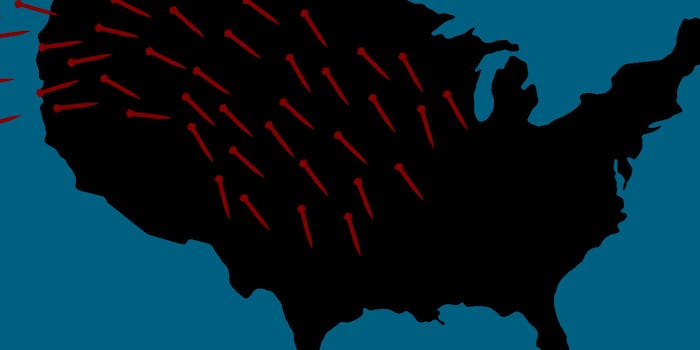 A fake war between the U.S. and Mexico doesn’t justify bloodshed in Gaza

Adding a bit of perspective to a mess.

More than 1,000 Palestinians have been killed and more than 6,000 injured since hostilities intensified in the region over two weeks ago. Another 300,000 have been displaced. By one estimate, more than 4 million pounds of explosives may have been dropped onto the Gaza Strip, an area approximately the size of Las Vegas, Nev. Roughly 1.2 million people are currently without access to safe water.

With the recent Israeli shelling of a U.N. elementary school in Beit Hanoun—which had been converted into a shelter for 800 people, mostly women and children—the resolve of Hamas and other pockets of resistance has heightened. In reaction to the attack, roughly 10,000 Palestinians demonstrators in the West Bank marched toward Jerusalem. Two were killed and hundreds injured when the march clashed with Israeli police near the Qalandiya refugee camp.

Prior the attack in Beit Hanoun, the United Nations Human Rights Council (UNHRC) voted to launch an investigation into the purported humanitarian and human rights violations taking place in the Occupied Palestinian Territories. The United States alone opposed the resolution, with 29 countries voting in favor and 17 abstaining.

The deaths of at least 208 Palestinian children have led many prominent writers, politicians, and celebrities to denounce Israel’s tactics. Others have sought out ways to rationalize the “cost of war.” Follow the UNHRC vote, U.S. State Department spokesperson Marie Harf told reporters, “We will stand up for Israel … even if it means standing alone.”

Many were shocked on July 20 when Israeli minister Naftali Bennett told Sky News: “What Hamas is doing is effectively self-genocide.” Bennett may be the only Israeli official to claim that genocide is occurring in Gaza, even if the part about Palestinians killing themselves is completely irrational.

A handful of American pundits have rationalized the bloodshed using a completely unhelpful and potentially racist hypothetical: A fictional war between the U.S. military and one of its neighbors—typically Mexico—which is lobbing homemade rockets at American cities.

A Washington attorney and former special counsel to President Bill Clinton writes for Fox News: “Would America agree to recognize Mexico as a sovereign state if Mexico were publicly committed to the destruction of the United States, with moonlighting military forces or terrorists free to use Mexico as a base for invading America or shooting rockets at American cities?” And he answers: “Of course not. So too for Israel.”

Another writer, for Washington Post said: “The notion that Israel should show ‘restraint’ is preposterous when one considers what the reaction would be in the United States if Mexican or Canadian terrorists shelled American neighborhoods.”

In a published Chicago Tribune letter to the editor, one area resident asks: “What would your response be if Mexico started firing 200 rockets a day, aimed at population centers in Arizona, Texas or California?”

The same question appeared in a recent Daily Show skit, albeit facetiously, when Jon Stewart attempts to address the conflict in Gaza. His efforts get continuously berated by a group of his colleagues. In his face, one yells: “What if Mexico shot rockets into Texas?!”

For starters, that the United States would invade Mexico with a military force and establish civilian settlements, asserting a divine right to occupy land south of the border is incredible. But putting aside the fact that from almost every standpoint the premise of the question is totally irrelevant—in fact, because it is so absurd—indulging it could lead to a higher perspective.

What if rockets were being launched by a group of Canadian or Mexican militants targeting a nearby American population? And what if the U.S. military reacted in precisely the same fashion as the Israeli Defense Force, launching a full scale ground invasion and aerial bombardment against cities like Monterrey, Ciudad Juárez, or heavens forbid, Toronto?

Let’s conduct a little thought experiment, and see how the situation changes when “U.S.,” “Canada” or “Mexico” replace “Israel,” “Gaza” and “West Bank.”

A recent report in the Guardian might have read: “Thousands of Canadians took part in a demonstration after more than 15 women, children and United Nations staff were killed and around 200 injured when a U.N. shelter for those fleeing the U.S. bombing was hit. A White House spokesperson insisted it had given the occupants of the shelter time to leave before shelling the area. But the U.N. flatly contradicted that, saying it had made repeated attempts to negotiate a window during which people could safely leave the area but none was granted. It said it had given the U.S. military precise coordinates of the location of the school.”

And a recent New York Times op-ed by Palestinian journalist Mohammed Omer might say: “On Monday, U.S. Army fired artillery rounds at the University Hospital in Monterrey, Mexico, claiming to target a cache of anti-tank missiles. Dr. Alma Rios, a surgeon, was operating on a patient when the first shell struck. She ran to the floors below to discover at least four dead and dozens of colleagues—doctors, nurses, orderlies and administrators—injured. The medical staff had become patients.”

A letter published this week by The Lancet, the world’s leading general medical journal, would have denounced the United States like so: “We are appalled by the U.S. military onslaught on civilians in Mexico under the guise of punishing terrorists. This is the third large scale military assault on Mexico City since 2008. Each time the death toll is borne mainly by innocent people in Mexico, especially women and children under the unacceptable pretext of the United States eradicating political parties and resistance to the occupation and siege they impose.” 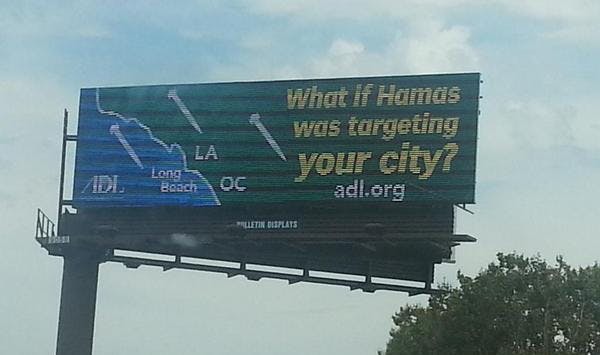 A Los Angeles billboard paid for by the Anti-Defamation League.

More than just bad press, the United States and its citizens would endure an onslaught of negative social media attention. Accusations of war crimes, genocide, apartheid, and politicide would continuously flood the Internet for weeks and years to come:

Note: These are not real tweets. The names of the countries have been altered for the purpose of this hypothetical. 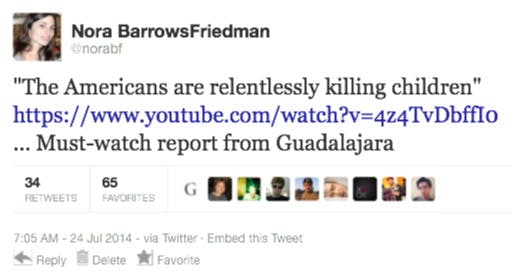 Better yet, what would they say if the roles were completely reversed: 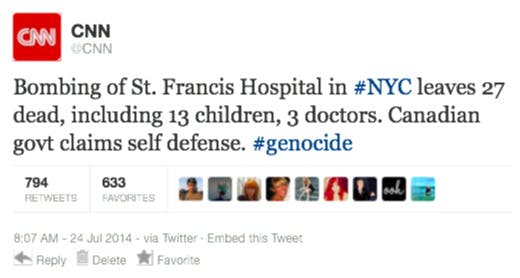