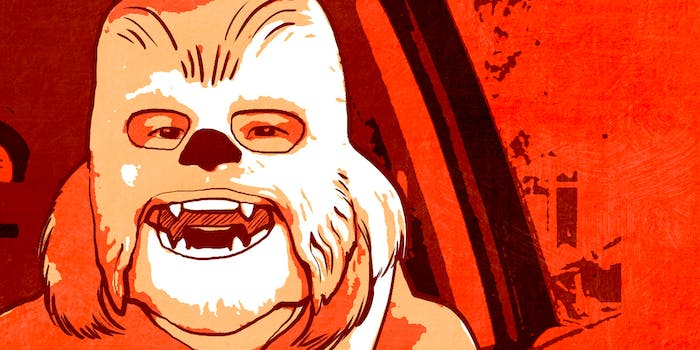 Is that all it takes?

This is the lesson of Candace Payne, the 37-year-old Texas mom who charmed the world with her short unboxing video of a Chewbacca mask. Payne has seen the typical markers of internet fame—appearances with The Late Late Show host James Corden, Good Morning America, and even Ellen Degeneres.

But this week, Payne went on to receive a bigger prize than most viral stars are used to seeing. Payne, her husband and two children were given a tuition-free attendance to Southeastern University, a private Christian college in Lakeland, Florida. While Payne also received accolades and gifts from Kohl’s (where she purchased the mask), Hasbro (the maker of the mask) and JJ Abrams (director of the most recent Star Wars feature), many took to Twitter to express their disagreement with the decision by the university.

The chewbacca lady and her family are all getting college tuitions paid for, of course. White mediocrity on the internet rulez.

Candace Payne, the Chewbacca lady, & her entire family were granted full scholarships to a FL University. White mediocrity is so tiresome

It’s true, free tuition is an oversized prize for such easily begotten fame. It’s also true that the real rewards typically reaped for online success tend to heavily favor insta-celebrities who are white. Content derived from black users of Twitter, Vine, or Snapchat is often sidelined as part of a monolithic Black Twitter. Black users of social media often have a comparable—if not larger—effect on the digital conversation and create moments, pictures, jokes, and movements that deeply root themselves into the mass culture. Yet, as Payne’s success highlights, that’s often ignored when it comes to big payouts for fleeting social media fame.

The most famous example of this is likely the story of Kayla Newman, aka Peaches Monroee. In 2014, Newman uploaded a Vine to show off her new eyebrow threading and famously uttered the phrase “eyebrows on fleek.”

The video popularized, if not coined, the term “on fleek” which has since been used by marketers and clothing companies with zero credit to Newman. Brands like IHOP and Taco Bell used the term to seem hip in their social media strategies (though usually just ended up cringeworthy) and major retailers like Forever 21 and Express followed suit. Ownership of the term even became a point of contention between Nicki Minaj and Christina Milian after Milian advertised for a shirt that said “Pretty On Fleek,” a term Minaj uses in her song “Feeling Myself.”

While Minaj might be waiting for her payday from Milian, Newman could arguably be waiting for her own payday from both. The Chicago teen, who was 17 when she uploaded the video, has seen no financial gain from her digital success. “I gave the world a word,” Newman told Fader Magazine. “At the moment I haven’t gotten any endorsements or received any payment. I feel that I should be compensated. But I also feel that good things happen to those who wait.”

The appropriation of black slang and culture by corporate marketers has a lengthy history, but the surge in notability surrounding Black Twitter means companies are hungrier than ever to seem hip and young by adopting its vernacular, art, and humor. Many of these are collected by @BrandsSayingBae, a Twitter account that collects the forced initiatives of companies to create unique personalities online, or /r/fellowkids, a subreddit with a similar mission.

Black social media use is not inherently different than that of white or Hispanic or Asian or other social media use—it generates content that benefits marketers and the platforms themselves. What is different, however, is the degree to which these users get credit for their creations. Black Twitter as a term itself is harmful to this process—it homogenizes a vast and active user base and condenses it for mass consumption, essentially dehumanizing the real people behind the content. Dexter Thomas, the “Black Twitter reporter” for the Los Angeles Times, stresses this fact. “There’s no understanding of it,” Thomas warned in Poynter. “As far as mainstream media are concerned, it’s mostly police brutality activism and tweets about Beyonce.”

Black people use Twitter at a higher rate than white people and are far more active, according to a survey by the Pew Research Center. Yet it’s far more often Black Twitter is treated as a separate entity from the rest of Twitter, even when trends, jokes, and hashtags that start mainly among black users expand to include a variety of demographics. The genesis of these viral moments are not, as there were with the Chewbacca Mom, typically examined down to the individual who generated them. They are signed off as Black Twitter and the everyone else moves on.

This singular vision of black people online can often come off as gawking, such as /r/BlackPeopleTwitter, a subreddit that collects jokes and moments online that often create humor at the expense of the people in them. Laughing at people online isn’t unusual in itself, but the expressed mission of the forum to limit its scope to black people is deeply troubling. It’s also not helpful that Reddit is largely white and has struggled to remove white nationalists and other hate groups from its ranks.

The demand for content from black creators online is unchallenged, but the inequality apparent in the rewards companies and the media heap on black users is clearly one-sided. It might seem ridiculous to receive such praise and material gain for donning a Chewbacca mask at all, but platforms and marketers spend billions every year attempting to recreate the kind of spontaneity that can sell anything from Star Wars memorabilia to white Vans.

Users of all races can and do generate these moments for them, but it seems that only when the subject is white that they see any of the credit.