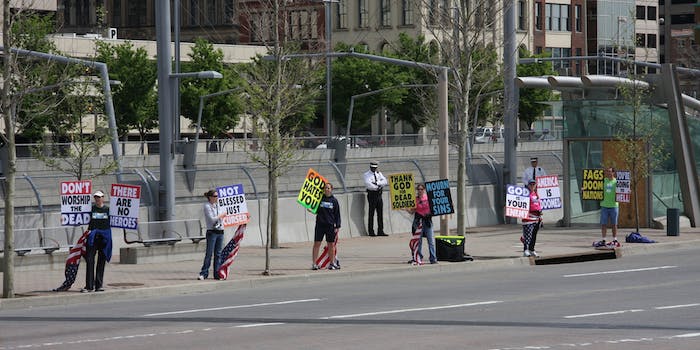 The Westboro Baptist Church is even more insane on Vine

Bigotry is a full-time job.

If you think gleefully picketing the funerals of dead soldiers with posters declaring “GOD HATES FAGS” is bewildering behavior, you should see what mischief the Westboro Baptist Church gets up to on social media. When distilled into six-second vines, the extremist sect has something like a sense of humor, at least while off-duty.

Here, for example, is a hilarious and adorable recreation of the 2004 tsunami that killed a quarter of a million people.

A look behind the scenes at A&E’s controversial Duck Dynasty:

They really love to sing.

But not as much as they love their signs.

In fact, the posters seem to have minds of their own.

At the end of the day, though, it’s all about the kids.

And Miley Cyrus, whom God apparently doesn’t hate yet.

I don’t know about you all, but I’ve never felt closer to salvation.