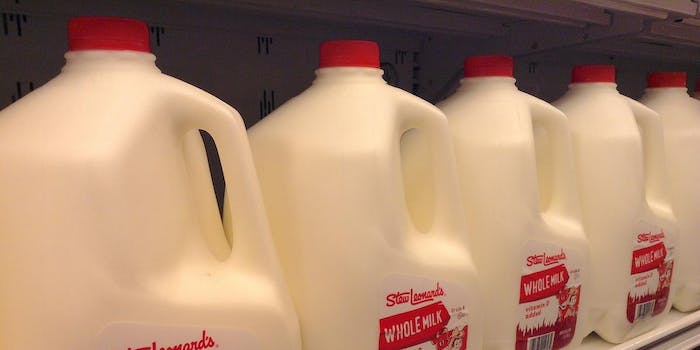 The ghost of Louis Pasteur is all 'LOL.'

The ghost of Louis Pasteur is shaking his finger at West Virginia lawmakers after they passed a bill legalizing the sale of raw milk in their state.

Almost a week after Gov. Earl Ray Tomblin signed Senate Bill 387, which allows for the distribution and consumption of unpasteurized milk, several of the celebratory lawmakers fell ill. While the stricken insist that a “stomach bug”—completely unrelated to the bacteria swimming around a bottle of straight-from-the-udder dairy—is going around, they all happen to be among the few who toasted to the new law with a tall glass of raw milk.

“I highly doubt raw milk had anything to do with it, in my case,” House delegate Pat McGeehan told WSAZ on Wednesday. McGeehan, however, admitted to having a sip of the raw milk, offered to him by Scott Cadle, a delegate who sponsored SB 387.

“[Cadle] caught me in the hallway, offered a cup to me, and you want to try to be a gentleman,” said McGeehan. “I had a small sip and walked away and tossed the rest of it.”

West Virginia health officials are looking into the apparent food poisoning after reportedly receiving an anonymous complaint. According to WSAZ, at least one person told the Department of Health and Human Resources that the milk was distributed illegally.

The West Virginia Alliance for Raw Milk (WV-ARM), which is a real thing, addressed the illnesses Wednesday afternoon in Facebook post.

“As the sickness at the Capitol has become more and more public over the past few days, the question remains, did the raw milk make our legislators sick?” they asked. “At this point, no one can really answer that.”

WV-ARM added that if the milk did, in fact, sicken legislators, then it’s all the more reason to keep SB 387 and regulate the consumption of raw milk. And when it comes to having raw milk and drinking it too, Pat McGeehan isn’t about to come between a man and his milk mustache.

“There definitely shouldn’t be a law against allowing people to do what they want within the framework of the rule of law,” he said, possibly barfing into a bucket shortly thereafter.