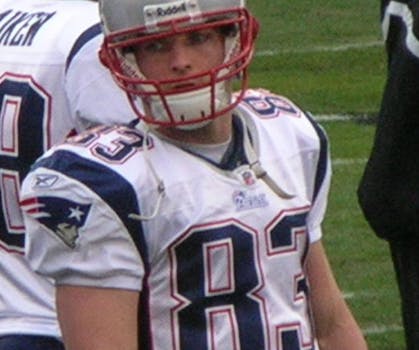 There's losing, and then there's pointing out that your opponent has a bunch of kids from different baby mamas and also might have killed a guy.

There’s losing, and then there’s pointing out that your opponent has a bunch of kids from different baby mamas and also might have killed a guy.

Proud of my husband and the Pats. By the way, if anyone is bored, please go to Ray Lewis’ Wikipedia page. 6 kids 4 wives. Acquitted for murder. Paid a family off. Yay. What a hall of fame player! A true role model!

Lewis, who has said he’s retiring after this year, is thought to be a lock for the Pro Football Hall of Fame. His Wikipedia page states he has six children by four women, and that he reached a settlement with the families of two men who were murdered in 2000.

Welker’s Facebook profile is private, and her status updates are closed to outsiders. But somebody grabbed a screenshot of her rant, which quickly made its way to sports blogs.

Embarrassed, she wrote to Larry Brown Sports to apologize.

I’m deeply sorry for my recent post on Facebook. […] I let the competitiveness of the game and the comments people were making about a team I dearly love get the best of me. My actions were emotional and irrational and I sincerely apologize to Ray Lewis and anyone affected by my comment after yesterday’s game. […] It is such an accomplishment for any team to make it to the NFL playoffs, and the momentary frustration I felt should not overshadow the accomplishments of both of these amazing teams.

This isn’t the first time a Patriots wife has defended her husband after losing a big game. The previous season, after the Patriots lost Super Bowl XLVI to the New York Giants, supermodel Gisele Bundchen lost her cool while defending her husband, quarterback Tom Brady.

“My husband cannot f**king throw the ball and catch the ball at the same time,” she said, referring at least in part to a drop by Welker. “I can’t believe they dropped the ball so many times.”