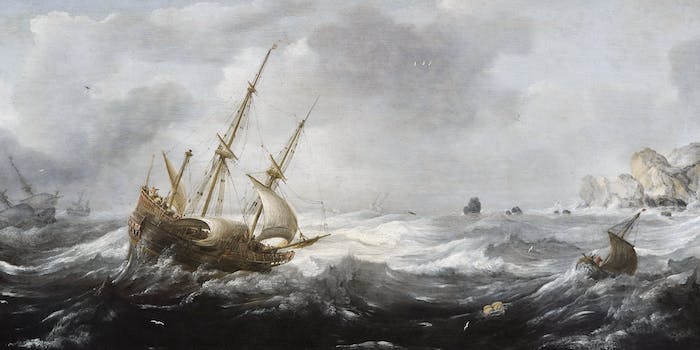 We spoke to the band behind the viral TikTok sea shanty, ‘The Wellerman’

An obscure 19th-century sea shanty is huge on TikTok—but it wouldn't have gone viral without this folk band, The Longest Johns.

TikTok is currently overrun with people singing “The Wellerman,” a sea shanty about the New Zealand whaling industry. Packed with 19th-century nautical slang, the lyrics aren’t exactly Top 40 material. But with its rousing chorus and jaunty rhythm, it has undeniably powerful vibes. Kicking off with a solo version sung by Scottish TikToker Nathan Evans, “The Wellerman” snowballed in popularity as more people added new harmony tracks. To get to the bottom of this trend, we spoke to the sea shanty band The Longest Johns, who sowed the seeds for this song to go viral.

First, what exactly are sea shanties?

Sea shanties are working songs, designed to help sailors keep time while doing repetitive labor. They overlap with the call-and-response style of chain gang songs and the “waulking songs” of Scottish laundrywomen. These days, we mostly hear sea shanties in the soundtrack for nautical films, but the genre is a surprisingly perfect fit for TikTok. The songs are usually performed a capella (making it easy for people to join in), and a typical sea shanty invites layered harmonies. In other words, they’re ideal for TikTok’s duet function. The results are both haunting and incredibly catchy:

How ‘The Wellerman’ went viral

British folk band The Longest Johns have released three albums so far, all based around traditional sea shanties and shanty-adjacent folk songs. “The Wellerman” is kind of a deep cut by their standards, but as the band explained to us in a Zoom interview, there’s a reason why this particular song went viral.

The Daily Dot: Is Wellerman a popular song when you perform live, or was it a surprise to see this particular sea shanty take off on TikTok?

Jonathan “JD” Darley: It’s actually grown in popularity since we put out a video about a year and a half ago of us singing it at other people in the game Sea of Thieves. We made a little series called Open Crewsing where we’d join random players and start singing for them in the game. The first one we put out was “The Wellerman.”

Before that, we’d sung it at gigs and it was on our albums and stuff. But it wasn’t anything too different from the others. That video got really popular in Sea of Thieves circles, and it started to spread. Then in a bunch of different waves, that video and that song has had a bunch of different viral peaks. It started getting shared on Tumblr, and then iFunny, and then it had a little run on Reddit. Then we released all of our songs for use on TikTok… leading up to now, where this one’s gone absolutely crazy and blown up in the mainstream.

Could you tell me about the history of the song itself?

Andy Yates: It’s an old New Zealand sea shanty, a whaling song. If you listen to the verse lyrics, that’s quite obvious. The Wellerman itself refers to a company called the Weller Bros., they would supply whaling ships around that area. Which is what the whole chorus is about. It’s quite a weird and obscure sea shanty.

Sea shanties are kind of the definition of a niche genre, but they clearly have widespread appeal. Why do songs like this stand the test of time, 200 years later?

Dave Robinson: I think it’s always been communal in nature. Right from the beginning they were made so people could work in time with each other. They had to be able to join in. I have a theory about why “The Wellerman” is quite so popular at this moment: it’s a song about people in a tough situation waiting for the hope of someone bringing supplies. The Wellerman were the [British supermarket chain] Morrisons of yesteryear.

It’s the ideal genre for collaboration on social media, and for people who can’t sing together in person.

JD: There’s a lot to be said about the nature of the songs as well. We’ve always been surprised with how many people who’ve never heard it before, kind of go through that whole realization of “what is this nonsense?” to “this is alright” to “this is really cool!”

One of the best examples was when we were playing the support act for Robbie’s wife, who’s a pop singer, and she was performing to a group of quite young teenagers. And we were the support act, doing sea shanties. To start with they were just like, “What the hell is this nonsense, this is weird.” Then they started to look around at each other and settle in, and by the end of the first song, they were all hooked. For the rest of it, they were just going nuts, singing along, clapping. It’s very niche, but it’s surprising and amazing how easy it is to connect with it and feel that sense of community and join in these songs.