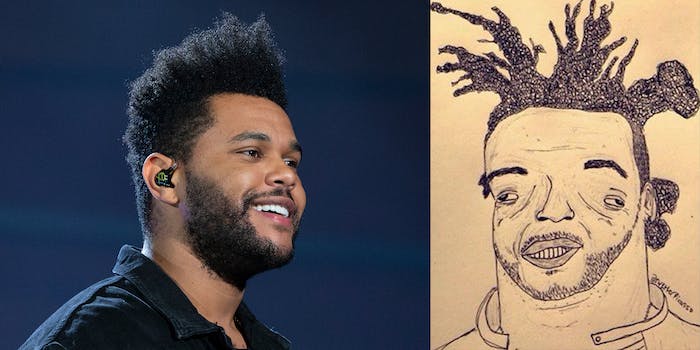 Artist Tw1tterPicasso drew the Weeknd in 2017. A random account passed it off as its own.

Fan art is a very personal process. It can also be a frustrating one, especially if someone goes viral from stealing your art.

On Dec. 31, Twitter user albert12798 posted a drawing of the Weeknd, with the caption “i drew the weeknd.” It went viral. On Jan. 2, a Weeknd fan account posted that tweet and revealed that the singer had actually changed his Instagram profile photo to that drawing.

But many people pointed out that they didn’t even bother to remove the real artist’s signature: @Tw1tterPicasso. The albert12798 account also posted a drawing of Travis Scott, which is Tw1tterPicasso’s, though this time they erased the signature. Tw1tterPicasso originally posted it in 2017.

On Sunday, Tw1tterPicasso posted the Weeknd art to Instagram, with the caption, “Appreciate the support but randoms gotta stop stealin my shit and repostin it.” Like the Travis Scott drawing, the Weeknd art is also from 2017.

Tw1tterPicasso’s a pretty well-known account, and his drawing style is fairly recognizable. A 2016 New York Magazine article caught up with the Australian artist (identified then as Corey) back when he would draw people’s Twitter avatars by request.

On Twitter, people called out the blatant theft and tried to redirect people to Tw1tterPicasso’s page. “It’s so fucked up that an ART THIEF is getting more clout and support than the actual artist of this piece,” said Twitter user @Thuminnoo, pointing out the disparity between the original post and the thief’s.

Reached for comment, Tw1tterPicasso confirmed those are his drawings, and adds, “I have no idea who Albert is.”

The Weeknd has not addressed the fan art, but it appears several commenters on his most recent post (from Dec. 31) also changed their avatars to the drawing.