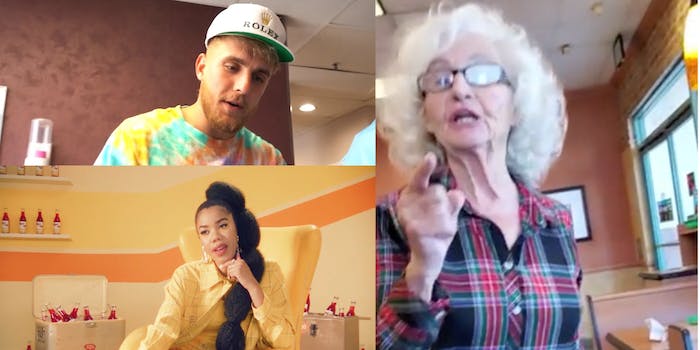 Jake Paul being connected to Pizzagate, a repeat offender Karen, and more.

An elderly ‘Subway Karen’ accused a young girl of being a hacker. She was just watching a YouTube video. Here’s what else caught our attention this weekend:

A Karen claimed to be with a nonexistent—and already debunked—federal agency, the Freedom to Breathe Agency, all so she could intimidate a worker regarding the store’s mask policy. A male Karen scraped social distancing stickers off another store’s floor in the name of “justice, freedom, and love.” These viral moments had online spectators crying out: Essential workers don’t get paid enough for this sh*t.

Catch up on another Karen story and more below.

The FBI has confirmed that the raid on YouTuber Jake Paul’s home is related to an ongoing investigation into allegations that Paul participated in a riot at a shopping mall in Arizona last June. Paul was not home at the time, and no arrests have been made thus far. Firearms were also reportedly removed from the home as a precautionary measure and are not tied to the investigation. But false rumors swirling on Twitter claim that Paul is instead being investigated for drug dealing and sex trafficking children.

If you’ve considered writing books for kids but aren’t sure where to begin, let R.L. Stine show you the (spooky) way in this MasterClass series.

The “Karen” who went viral last week for refusing to wear a mask in a DMV has a history of harassing employees over mask mandates. Anna Peric, or “DMV Karen” as the internet knows her, has uploaded at least four videos of herself arguing with employees to her Facebook page. Peric has recorded herself at the DMV and Planet Fitness, among other places, refusing to wear a mask.