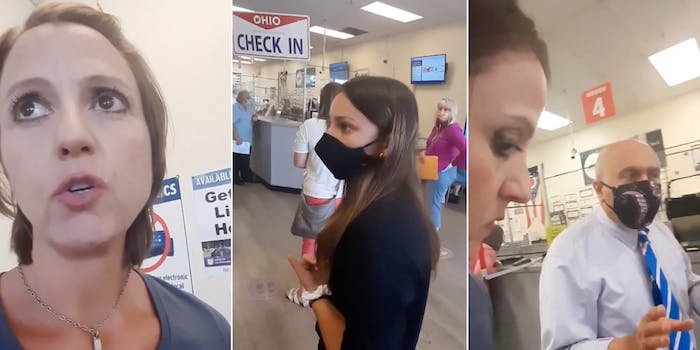 'Don’t tell me what to do with my body.'

A maskless “Karen” caused a stir at an Ohio DMV when she refused employees’ orders to leave—despite having no reason to be there in the first place.

The woman, who goes by Anna E. Peric on Facebook, uploaded a nearly five-minute video documenting her experience at the Bureau of Motor Vehicles in Mentor, Ohio. Peric attended the BMV with her boyfriend, Marc, who was there to renew the registrations for his vehicles. A sign on the door stated, “Face Coverings Must Be Worn Upon Entering.”

Peric filmed their exchange with an employee who tried to assist the couple. The employee frustratedly told Peric, “You can’t record me without my permission.”

“No, I’m accompanying my boyfriend,” Peric responded—a line she repeatedly parroted throughout the confrontation.

At that point, the employee got her supervisor, who told Peric she couldn’t record inside the BMV and asked her to wait outside. Peric refused and once again said she was accompanying her boyfriend—who, by that point, was sheepishly trying to defuse the situation.

Peric pressed the supervisor for an explanation as to why she had to wait outside. When he told her the BMV was over capacity, she asked to see the building’s occupancy permit. The supervisor then told Peric she had to leave because she wasn’t wearing a face mask, which Peric protested.

Finally, the supervisor told Peric he was going to call the cops, at which point Marc tried once again to deescalate the situation.

“The cops are gonna come here,” he said. “You don’t want that shit again.”

Peric also faced pushback from other customers inside the BMV.

“So you’re gonna compromise my health by not wearing a mask?” one person asked her. “Because that’s what you’re doing right now.”

“The face mask you’re wearing is compromising your health,” Peric shot back, and later told the woman, “Don’t tell me what to do with my body.”

In her video description, Peric wrote that the Mentor Police arrived at the BMV and told her she was allowed to take photos and video. The officer allegedly invited her to “move away from the crowd and wait for Marc by his car,” and Peric thanked the police for being “professional, knowledgeable and human towards me.”

Peric’s video has generated nearly 150,000 views on Facebook. This isn’t the first mask-related showdown she’s filmed, either. At the end of July, a video of Peric harassing a Planet Fitness employee over their “unconstitutional facemask mandate” earned more than 33,000 views.