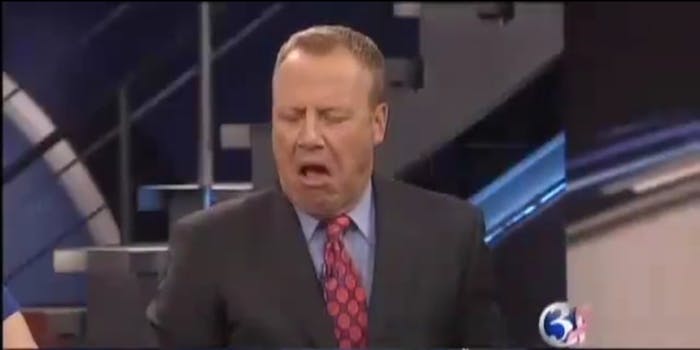 Whatever this weatherman just ate on air, it wasn’t Grape Nuts

Well, that's one way to start the morning.

If you happened to tune in to Hartford, Conn., CBS affiliate WFSB’s morning show yesterday, you might have caught the station’s weatherman having a really bad morning.

Scot Haney joined his colleagues for a little banter during the weather and traffic report. He noticed something on the floor by his shoe. Since this is a morning show, he thought they were stray Grape Nuts. He then proceeded to but the mysterious floor goop in his mouth, then quickly realized it’s not Grape Nuts.

A few seconds later, Haney stood in front of a “Trending Now” screen, and confessed that he actually ate cat vomit from the bottom of his shoe. His WFSB bio states that he has three cats, so the vomit in question could have from various sources. Haney then tweeted about the incident, which is indeed trending now. So, the station likely got a few new viewers, but Haney will likely never get that taste out of his mouth.

I just ate cat vomit, I thought it was grape nuts! Omg!!!