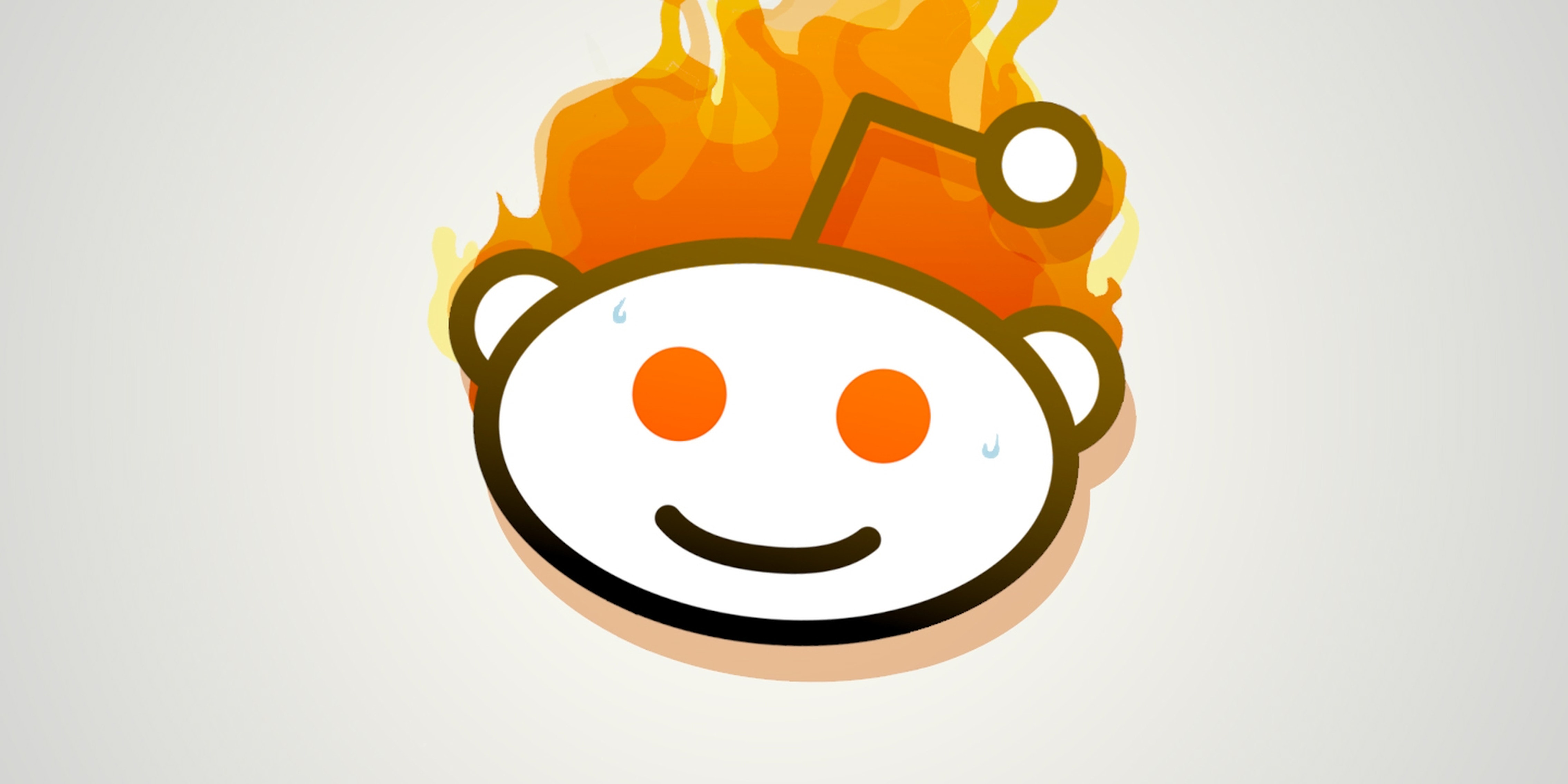 Last weekend, a subreddit that revels in casual cruelty among strangers hit 30,000 subscribers. But the mods of r/roastme are careful to distance themselves from Reddit‘s most controversial hives of bigotry. “This is a comedy subreddit, not a hate subreddit. Act accordingly,” they warn.

And savage comedy is indeed what r/roastme members attempt in the tradition of the infamous New York Friars Club Roasts, where no subject was taboo and no line went uncrossed. People willingly upload photos of themselves and brace themselves to be insulted by the mob. Here are a few notable examples, some of which are definitely not safe for work. 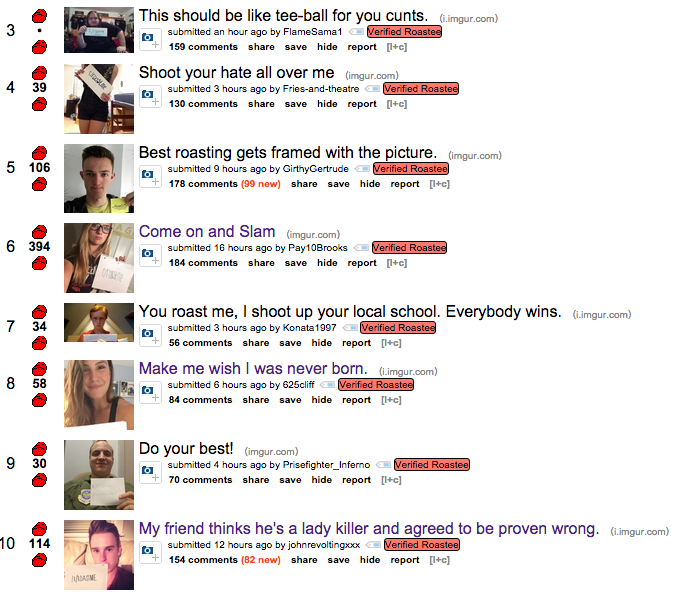 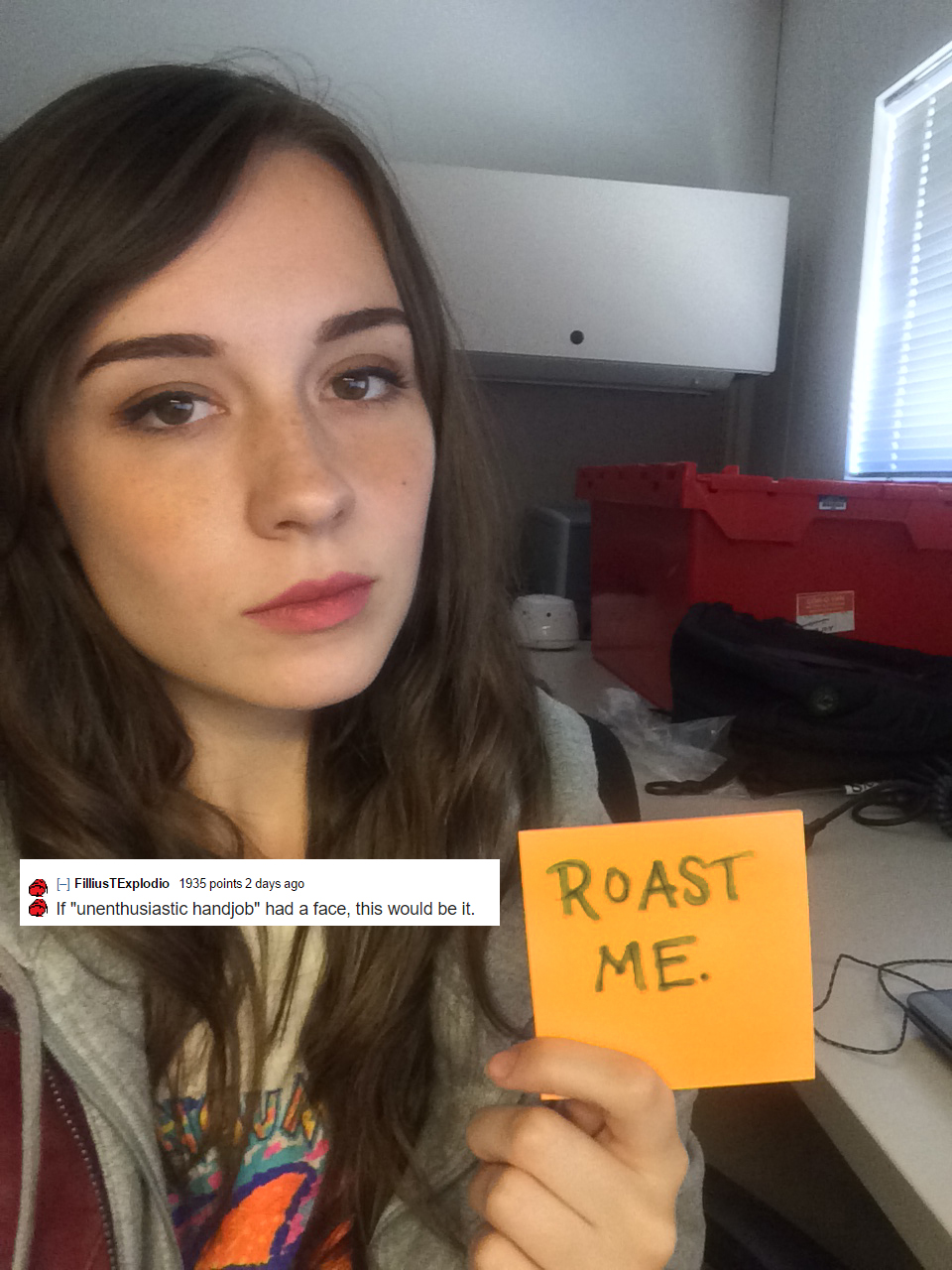 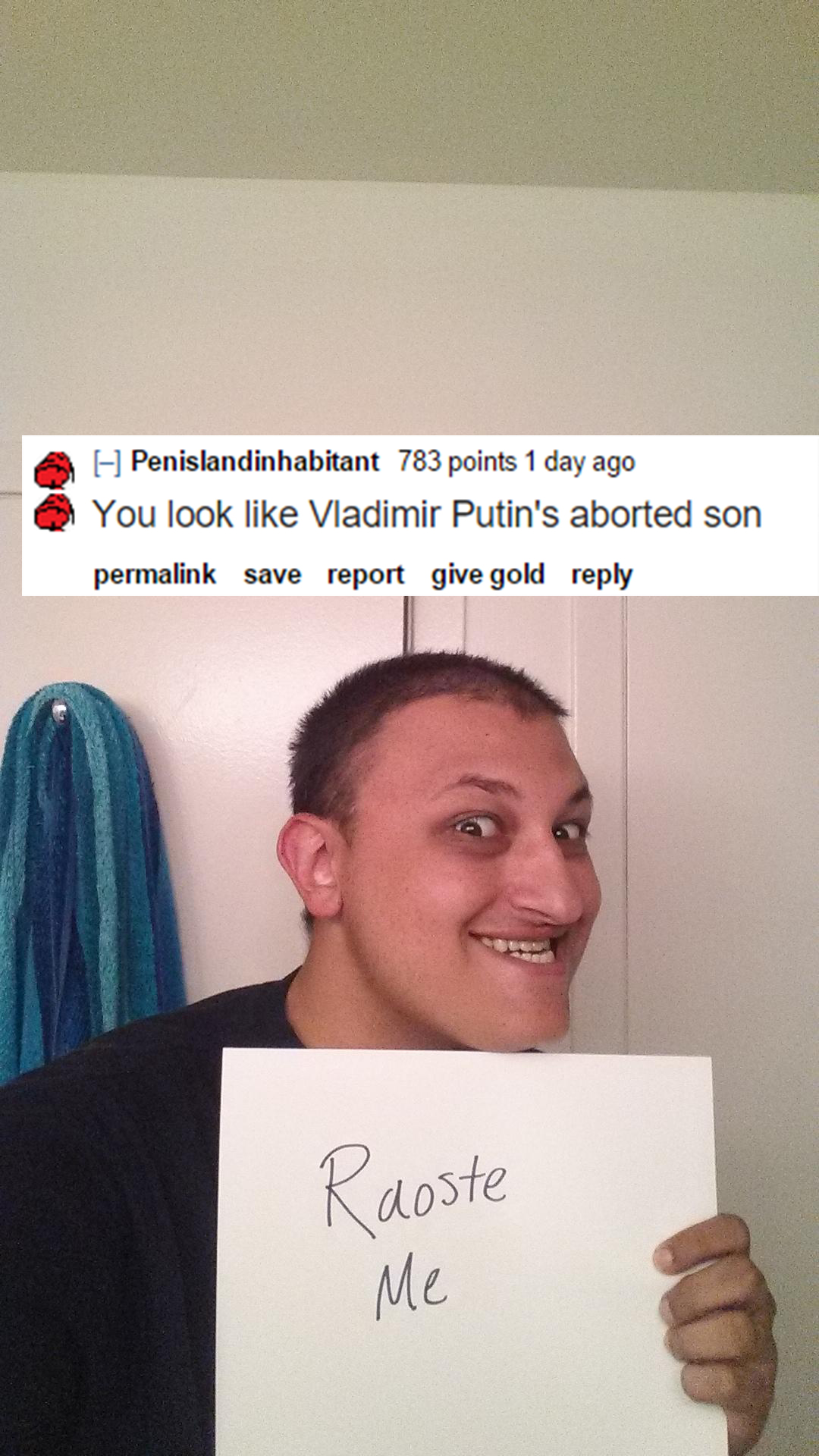 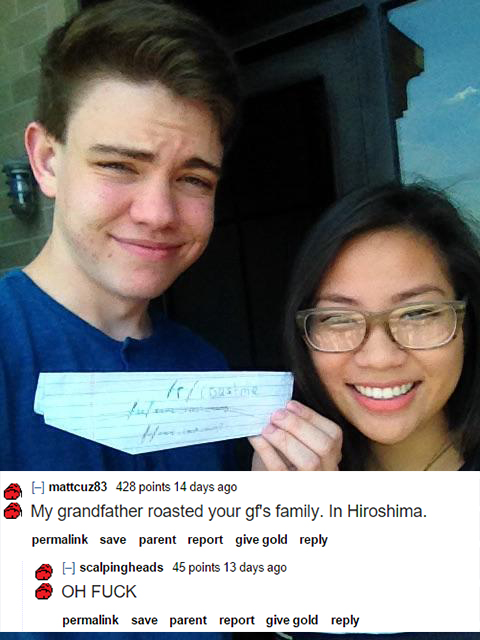 As the bravest—or perhaps most masochistic—pair of writers at the Daily Dot, we snapped a couple of Photobooth selfies and uploaded them for vicious scrutiny. Miles went for the blasé look, while Eve was more aggressive. Then we sat back and awaited our roasting. 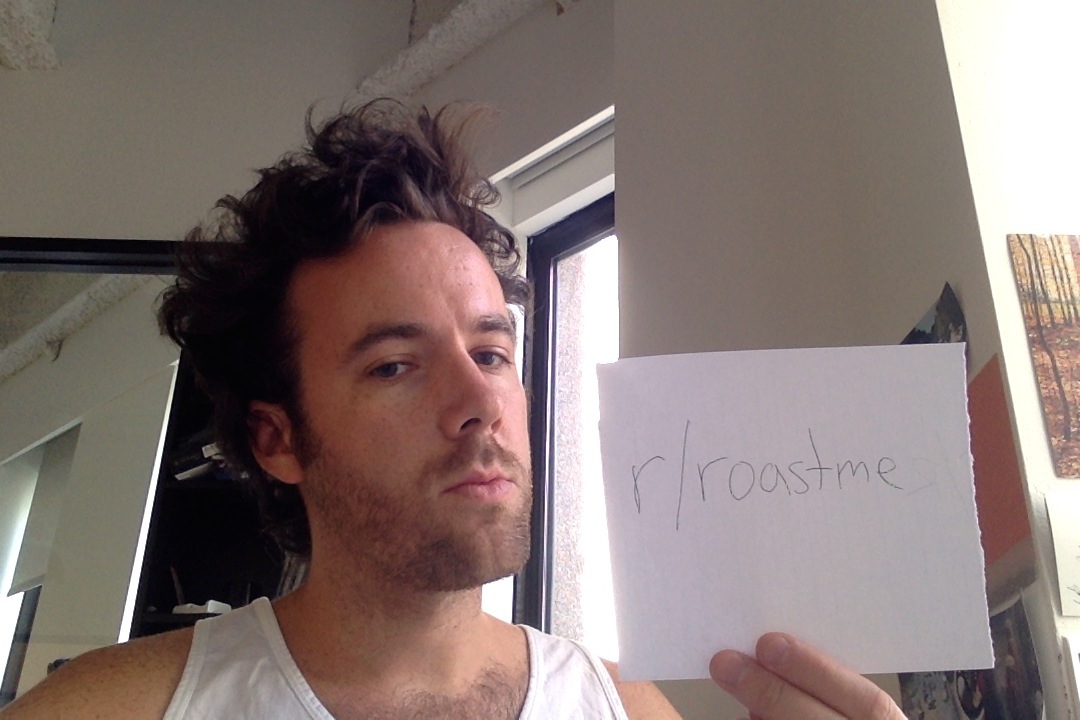 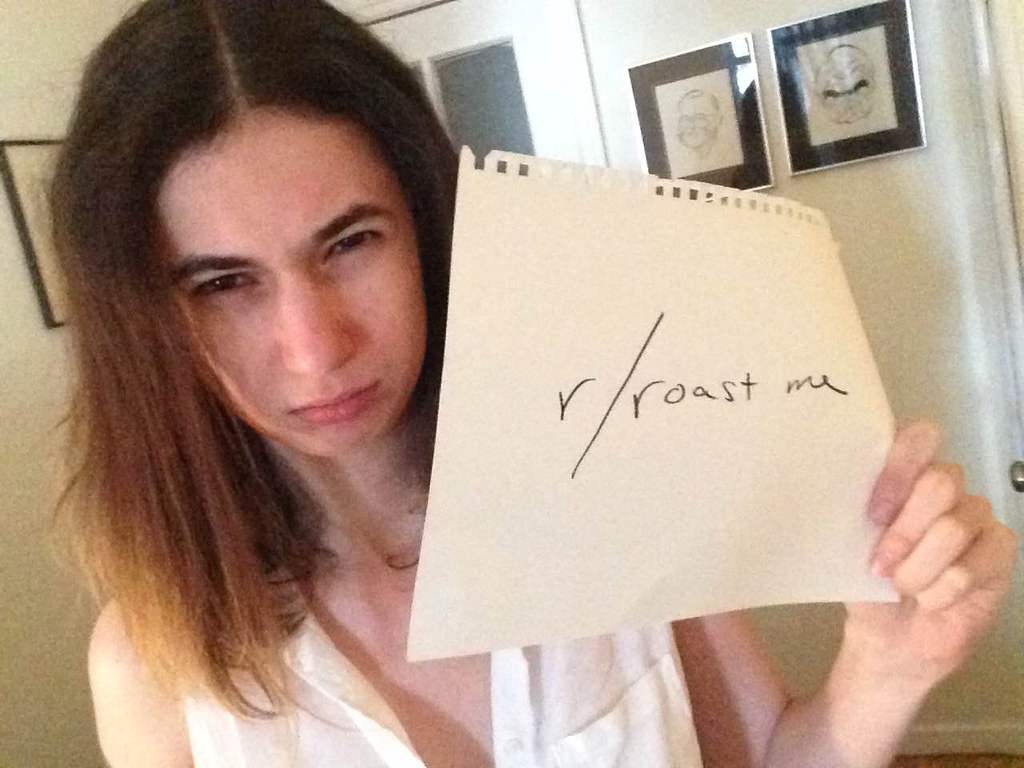 For some reason (sexism?), the photo of Eve garnered just eight jabs, while Miles’ photo elicited closer to 30. Eve rightly complained that most of hers were depressingly generic, of the “nothing we can say would be worse than looking in the mirror” variety. She did concede, however, following a couple of one-liners about personal grooming, that her hair was “not on point.” 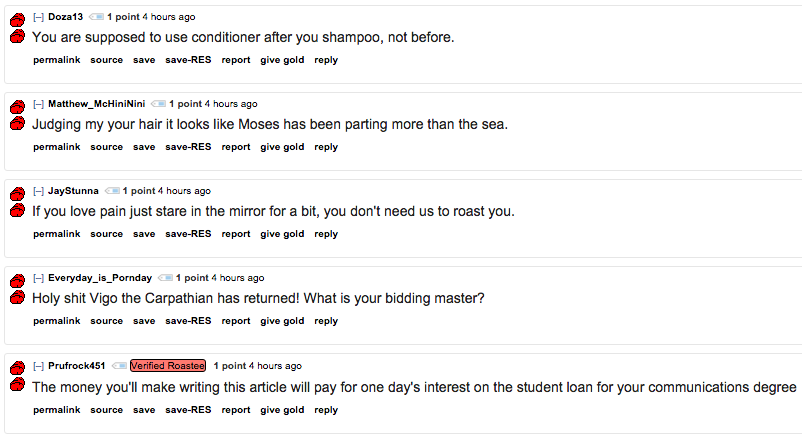 Joke’s on that last dude, though, because Eve doesn’t even have student loans to pay off. We agreed that the top-voted burn on her thread—“Looks like the last picture in a pamphlet about the dangers of krokodil”—was far and away the best, though still not worth the betrayal of womanhood and femininity entailed in creating a personal Reddit account.

The ire drawn by Miles’ photo broke down into three basic categories. Since he had posted with the headline “literally doing this for work,” many balked at the idea that any self-respecting business would employ him. “The only ‘work’ you seem to be doing is jerking off, smoking weed and not bathing,” read a typical response. (Hey, two out of three ain’t bad!)

Other members eagerly painted him as a sexual predator: “The ‘Date Rape Police Sketch’ template,” quipped one. Finally, there were more than a few unfavorable references to actors Ryan Reynolds and Ben Affleck. 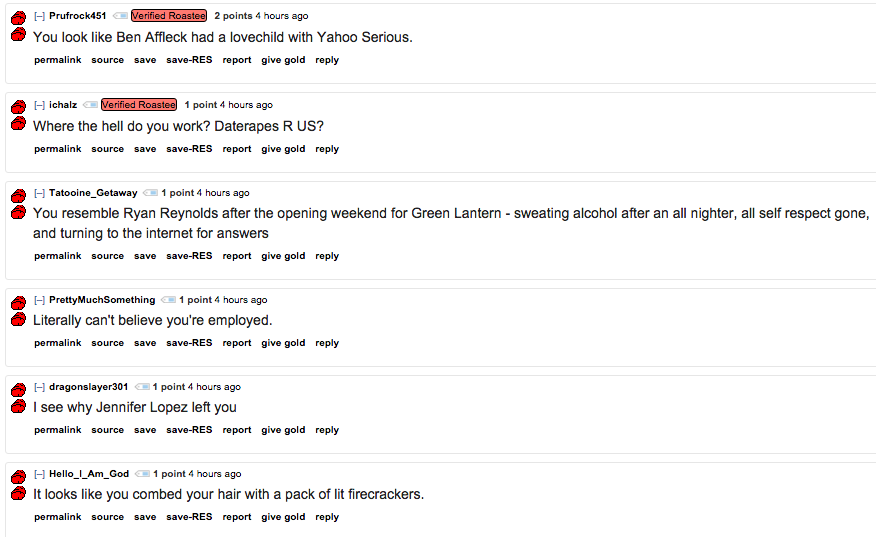 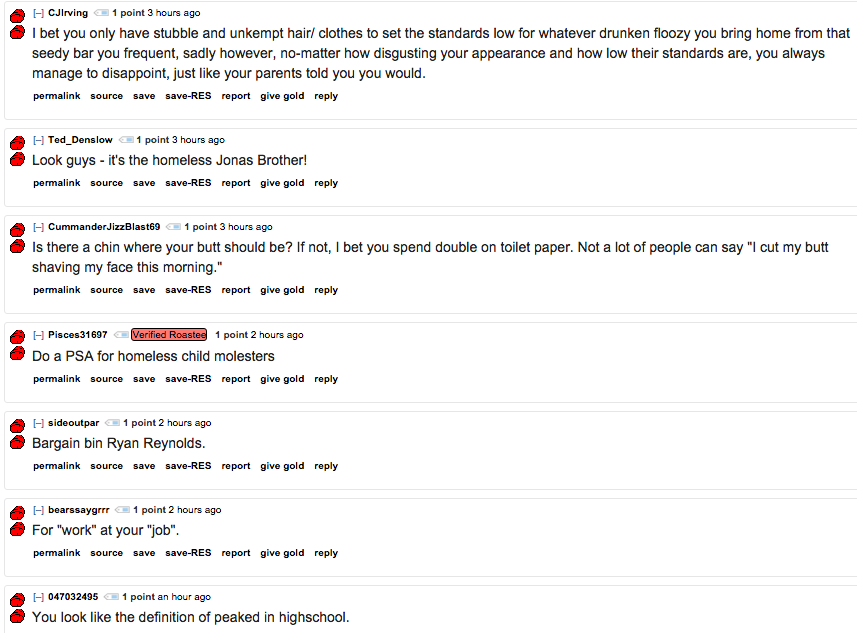 Ugly as these comments were, none really broke the skin. At least two groped so desperately toward a punchline as to seem bizarre. “If your hair would be a place, it would be Tianjin,” read one, alluding to a recent deadly explosion in China. “Where do you work? at the, toilet store?” was the other. Still, these cut deeper than comparisons to handsome movie stars.

But because we live in a society where women are constantly told that they don’t look good enough, both of us were surprised that Eve hadn’t gotten more negative attention—and she was admittedly just a bit jealous. She posted again in her thread, noting that she was “already in an emotionally vulnerable place” and urging the roasters to try harder. She wanted someone to make her weep.

No such luck. Both of us got a chuckle from the experience but walked away as the same pillars of self-esteem we were when we initiated it. Maybe there is a troll out there who could tear us to ribbons, and he or she is hiding in the shadows, waiting to strike. Until then, our twisted search continues.