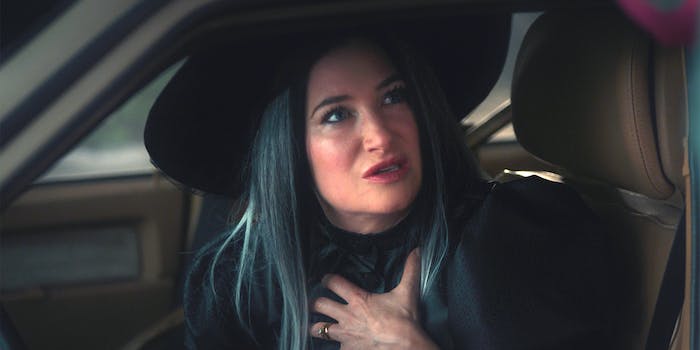 ‘Agatha All Along’ is inspiring lots of remixes and memes

The 'WandaVision' song is a banger.

WandaVision has plenty of tools in its arsenal—fan-favorite characters from the MCU as supporting players, its fantastic cast, and a premise prime for intrigue that doubles as an exploration of grief. But its greatest weapon just might be its music. In nearly every episode, powerhouse songwriters Bobby Lopez and Kristen Anderson-Lopez have created at least one catchy WandaVision theme song that homages whatever era of television that Wanda Maximoff and Vision are emulating.

In WandaVision’s most recent episode, those pieces have collided to create something almost as powerful as Wanda herself: A character-revealing theme song that might just be the most potent TV earworm since “Toss a Coin to Your Witcher.”

At the end of “Breaking the Fourth Wall,” Wanda learns she isn’t the only person with powers contained within the Hex world of Westview, New Jersey when her friend and neighbor Agnes, who finally introduced herself as Agatha Harkness, put Wanda under her control.

It’s a reveal that many Marvel fans saw coming for weeks, but it’s one that can be easily forgiven for several reasons. For one, Agatha Harkness is played by national treasure Kathryn Hahn, whose comedic timing has been a major strength in WandaVision. The other reason easily comes in the form of “Agatha All Along,” the villain-revealing theme song and absolute banger given to Agatha by Lopez and Anderson-Lopez; Hahn performs her own vocals for the song.

Clocking in at just a minute long, “Agatha All Along” could not be plainer about how Agatha has been pulling many of the strings in Westview. She manipulated Wanda and Vision’s talent show act in episode 2, she stopped Herb from revealing the gambit, she “recast” Evan Peters as Pietro, and she put on a show when Vision appeared to wake up Agnes’ mind. And, as Agatha tells us with a hearty villain laugh in the song’s kicker, she also killed Sparky, the lovable dog that the Maximoff kids adopted in Episode 5 that ran off and died before the end of the episode. It’s a journey, all right.

As Anderson-Lopez explained to Marvel.com, the song takes influence from monster sitcoms like The Munsters and The Addams Family to give “Agatha All Along” a “witchy, ghoulish feeling.”

Anderson-Lopez: It also has a little bit of an oompa loompa tenor feel to it too. We decided since we could hit any decade with that, we had to kind of take a couple swings at what would Agatha’s music be? But we ultimately decided the most fun is to just go right in with all of the—

But, because “Agatha All Along” is by the same songwriters behind “Let It Go,” “Remember Me,” “Into the Unknown,” it’s very unsurprising that Lopez and Anderson-Lopez have managed to create another extremely catchy hit. (To add to WandaVision’s musical repertoire, Lopez also worked on Avenue Q and The Book of Mormon.)

How much of a bop is the song “Agatha All Along”? The WandaVision clip featuring the song posted by Marvel Studios has been viewed nearly 2 million times since Monday. On Tuesday, Walt Disney Records released the soundtrack for WandaVision: Episode 7 a full three days before its original release date of Feb. 26. (Since the beginning of the season, episode soundtrack albums would drop a full week after each episode aired.) And “Agatha All Along” is, as of press time, the fifth most popular song on iTunes.

And in the five days since it made its debut on WandaVision, it’s already becoming a prime target of remixes and memes shared on Twitter and TikTok.

Over the weekend, we got both trap/hip-hop and bounce remixes.

There are several remixes linking artists like Rhianna and Taylor Swift to the song, whether it’s bringing in the audio to Marvel or pairing the song with an existing music video.

One person built a Minecraft-inspired shrine to the song.

It’s also a perfect song to reveal anyone’s villain origin story, whether it’s someone who buys too many books or who’s at fault for the response to the winter storm in Texas.

And someone imagined Agatha’s inner-thoughts before she revealed the gambit to Wanda—and us.

But mostly, people are still, several days later, really into “Agatha All Along.”

Given that it’s Marvel and there are still two episodes left of WandaVision, Agatha might not be WandaVision’s main villain. Mephisto, a Marvel Comics villain who’s linked with both Agatha and Wanda, could potentially make an appearance, and we’ve yet to meet Ralph, the husband that “Agnes” complained about for several episodes. But even if Mephisto ends up showing up before the end, there’s little doubt he could top Agatha or “Agatha All Along.”