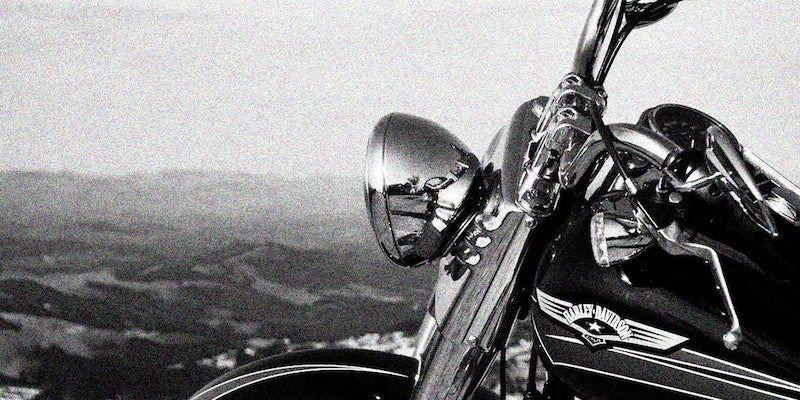 The Waco biker gangs aren't just murderers—they're 'thugs.' Why won't the media call them that?

In Waco, Texas, on Sunday, rival motorcycle gangs opened fire on each other after a fight inside of a “breastaurant” called Twin Peaks spilled out to the parking lot. Nine people died, eighteen others were injured, and almost 200 were arrested. The predominantly white groups—members of rival biker gangs, the Bandidos and the Cossacks—reportedly turned their guns on police officers, who were at the scene when the gunfire started. Somehow no innocent bystanders were harmed.

One thing stands out, however. The media coverage of this violence bears a stark contrast to sensationalist ways in which black protesters are covered at times of social unrest.

During the Baltimore protests, mass media outlets, such as CNN, centered their focus on the perceived criminality of the protesters. On the subject, I noted in a previous piece for the Daily Dot:

As people protest police violence that terrorizes their communities, elected officials, the media, and even celebrities hijack the story once matters escalate. Protests become riots, riots beget looting, and it’s all the fault of the victims, the community outraged at the continuous killing of their own.

Protesters were referred to as “rioters” and  “thugs,” exposing a double standard in how media portrays black social unrest, as opposed to predominantly white riots when, for instance, a sports team win. Criticism of this discrepancy was abundant, especially with regards to Waco. In response, the hashtag #WacoThugs was born.

The word “thug” has been completely absent from the Waco shootout coverage, although the gangs are responsible for multiple deaths, injury, and even turned their guns toward police. Anticipating this response, Twitter promptly and astutely addressed the disparity in the coverage.

More died today in Waco than Ferguson & Baltimore combined & the media still won't refer to bikers as thugs. Think about that. #WacoThugs

Why are these thugs tearing up the community?
The white community should condemn these acts of violence #WacoThugs

#WacoThugs became a trending topic, as the social media platform’s users applied the language used on communities of color on the motorcycle gangs.

The language used when covering the shootout has understated what actually went down on Sunday afternoon. As Salon’s Jenny Kutner points out, what transpired has been referred to as a “melee,” “ruckus,” “brawl,” “confrontation,” by CNN and New York Times.

#WacoThugs also pointed out the special treatment that motorcycle gangs received from law enforcement before and after the shooting. As community organizer Deray McKesson noticed, there was a relative calm after the scene as members of the gangs were seated alongside police officers. Absent were images of hogties, pepper spray, or riot gear.

& the gang is literally hanging out at the scene. #TwinPeaksShooting pic.twitter.com/FfSs24CK5Z

When will the national guard be activated in #Waco? Oh, that's right…

While it should be recognized that the police did, after all, arrest almost 200 members of the gangs, there seemed to be a certain privilege afforded to them at the same time, a privilege unavailable to dissenters in Baltimore or Ferguson, Mo. Texas Monthly’s Dan Solomon explains:

In a country where, among black citizens, having potentially stolen cigars from a corner store can leave a person dead on the sidewalk, or where playing with a toy gun can result in the immediate shooting of a twelve-year-old boy, or where a person who was able to walk when taken into police custody can be dead of a severed spinal cord by the time the ride in the van is finished, the mere fact that a massive shoot-out in a strip mall could end with police and bikers on peaceful terms does look like special treatment.

Waco police were well aware that this was a heavily armed group of criminally dangerous men, heavily involved in the Texas drug trade, yet they appeared to approach the incident with far less concern for any potential dangers. The Bandidos alone are apparently a dangerous international organization. Steve Cook, a Kansas City police officer who did undercover work with groups affiliated with the Bandidos told the Washington Post, “These guys are organized crime, but they are also domestic terrorists.”

These groups prey on the romanticization of biker culture, but they should be treated as criminals. He explains:

These guys are heavily involved in methamphetamine, cocaine, marijuana, motorcycle theft. Those are all primary businesses for them. The thing is, these guys want to put on this appearance, “Oh we’re just motorcycle enthusiasts and we just like to ride bikes.” The evidence is quite to the contrary.

Indeed, much of the language used in reference to the Waco violence plays on that romanticism of the Texas outlaw culture of motorcycle gangs. Even the term “shootout,” invokes images of the OK Corral, instead of what it actually was: violent criminals attempting to kill one another.

Of course, despite the recorded criminal activity on parts of the groups involved, we haven’t seen Wolf Blitzer ask a member of the Bandidos whether their use of violence is justifiable. Nobody has asked members of the clergy to condemn the actions of the white Christians, much like mosque leaders were expected to speak against the shooters who targeted the Muhammad drawing “contest” in Garland, Texas, and elected officials, such as Rand Paul, have not come out and blamed the senseless murder of nine people on the lack of fathers in white households.

#WacoThugs explores the media’s double standard in how they talked about the gruesome violence between the Bandidos and Cossacks. Images of the police response bore a stark contrast to the militaristic approach police took to confront the peaceful protesters in Baltimore and Ferguson. And even though the motorcycle gangs are recognized as violent groups often involved in criminal and homicidal activity, no state of emergency was issued when law enforcement expected more members to converge on Waco in retaliation for Sunday’s shootout.

The response on Twitter holds the media accountable for the implicitly racist coverage. How people of color are portrayed in the mass media affects public opinion in ways that make it seem okay, or normal, to see the oppressed as criminals and actual criminals—murderous motorcycle thugs—as outlaws.

Photo by Andre Banyai/Flickr (CC BY 2.0)