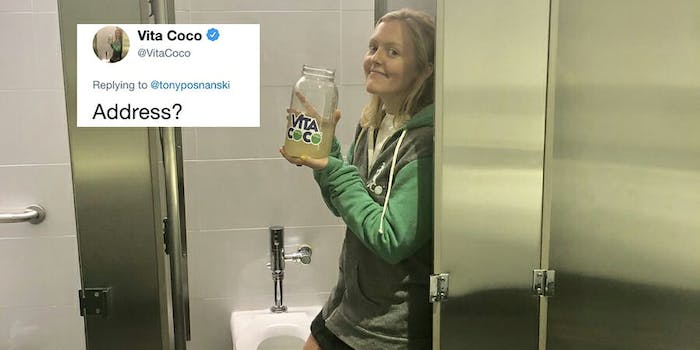 Breaking the seal on what brands are willing to do on Twitter.

A social media manager for coconut water brand Vita Coco peed into a jar because an amateur MMA fighter said coconut water was “fucking disgusting.” And the sentence you just read is completely true.

In a consumer world where “orange-flavored drink” Sunny D tweets about coping with depression, Tony The Tiger legitimately had to leave Twitter after being incessantly sexually harassed by furries, and SpaghettiOs had to profusely apologize after posting a Pearl Harbor tribute, this was somehow bound to happen.

I can’t do this anymore

“Save that nasty shit for someone else. I would rather drink your social media persons piss than coconut water,” Posnanski replied, not knowing the consequences his words would quickly bring.

Fuck that. Save that nasty shit for someone else. I would rather drink your social media persons piss than coconut water.

Shortly after, the verified account for Vita Coco broke new ground in what a brand is willing to do online for attention. Vita Coco posted a picture of the brand’s social media manager in a bathroom holding a jar of what was presumably her pee and a caption asking for Posnanski’s address in order to send him the jar.

According to Vox, the whole incident was actually a marketing stunt to promote Vita Coco’s “Impossible to Hate” campaign focusing on the brand’s new line of coconut water that actually tastes like coconut. “Like an Almond Joy,” Vita Coco brand director Allison Finazzo explained.

After learning the actual nature of this exchange, the one thing left unclear was the pee itself. Despite the reveal that Vita Coco was purposely looking for coconut water haters to bait into Twitter arguments, the brand insists that one aspect of the incident was wholly real. Somebody from Vita Coco really did pee in a jar.

The Daily Dot reached out for verification and got exactly what we expected.