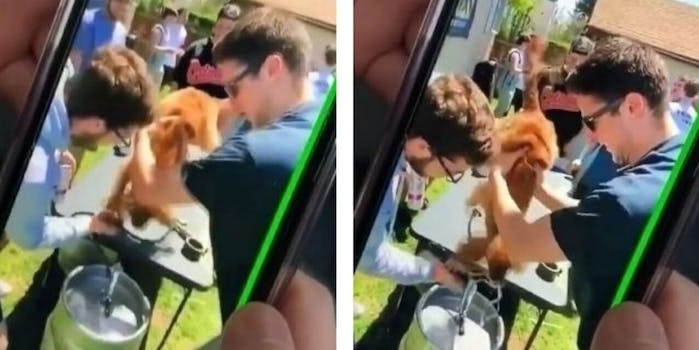 A Snapchat video showing two fraternity brothers forcing beer down a puppy’s throat has led to outrage on the internet—and a suspension for the chapter.

As CBS News reported, two members of the Hofstra University chapter of the Alpha Epsilon Pi fraternity were recorded lifting a 10-month-old dog into the air and forcing it to perform a keg stand. Basically, the video, reportedly recorded over the weekend, showed the two men place the beer tap into the King Charles Cavalier Spaniel’s mouth and spray the alcohol into its mouth.

The dog reportedly belongs to one of the men in the video. According to the Nassau County (New York) chapter of the Society for the Prevention of Cruelty to Animals (SPCA), the owner might face criminal charges. “A misdemeanor for failure to provide adequate sustenance and overdrive and torture of an animal,” the SPCA’s Gary Rogers said, via CBS News.

The Snapchat video came to light when Kristina Proscia—who said she’s the director of harm reduction and prevention at her sorority—tweeted the footage, writing on Twitter, “So apparently it’s okay to force dogs to drink beer even though it can kill them????”

so apparently it’s okay to force dogs to drink beer even though it can kill them???? @HofstraU @AEPi pls do better @peta pic.twitter.com/u8Wx78MUfL

The university condemned the incident and Alpha Epsilon Pi International said it had placed the Hofstra chapter on “cease and desist” because of “suspected violations of our health and safety policies.”

The video has been viewed more than 110,000 times, and the internet was quick to react and voice its displeasure with the potential animal abuse.

@HofstraU seriously?! SERIOUSLY?! @HofstraStudents @NassauCountyPD this is ABUSE????? Hello??? Someone do something about this???? I’m sick to my stomach https://t.co/4SludjpGpU

My cousin will be on the news later. As a member of Greek life I am disgusted and appalled at the behavior of some Greek life out there for there disgusting actions like the one showed in this video. Thankfully they have been suspended. They are terrible human beings #Hofstra https://t.co/skqPHx4W1o

I don't know which is worse, the incident or this ridiculous response. How can this be a "teaching moment" when all you are teaching them is they can literally get away with despicable animal cruelty? I think you might need a few lessons yourselves.

hi ppls! thank you for sharing this:) no i will not be taking this down. this is abuse. stop asking me to take it down because it will “get them in trouble”. that’s not my problem. maybe they shouldn’t have done this & then we wouldn’t be here. thank you:)

According to the SPCA, the dog is doing fine and has been returned to the owner.