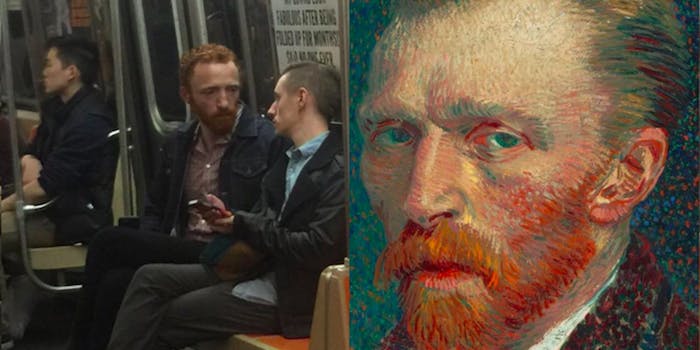 Around this time last year, the world was surprised to find out that Vincent van Gogh was still alive and well—and, more importantly, had both of his ears. The legendary artist was spotted riding the G train in New York City by a redditor, who posted their picture of the 162-year-old painter to the Internet. Meanwhile, Claude Monet was texting on a bus somewhere.

OK, it wasn’t the actual Van Gogh. Eventually it was revealed that the artist’s lookalike is an actor named Robert Reynolds. He saw the post on Reddit and offered some proof of his identity, letting everyone know that he frequently has people approach him to say, “Hey… I don’t know if anyone has ever told you this, but you look exactly like…”

Now the whole situation has become even more ridiculous. Earlier this week, and almost a year after the subway photo of Reynolds went viral, the Van Gogh doppelgänger was asked not if he realized that he looked exactly like the man behind The Starry Night, but whether he realized that he was a meme. A totally different kind of masterpiece.

A year & 78,000 shares later and a dude follows me into an NYC Starbucks yesterday to ask if I knew I was a meme. https://t.co/kmh9trIv5u

Thanks to the digital age we live in, even the everyday person can feel like a celebrity if their likeness has made it onto the interwebs as a meme or a video that gets enough views. No more “do you know you look just like this celebrity?” It’s all, “did you know you’re a meme?”