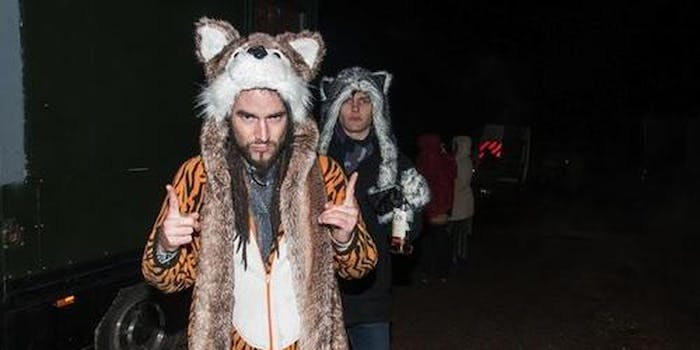 No one is cooler than the people who work at Vice magazine. No one.

No one is cooler than the people who work at Vice magazine. No one. And no one is quicker to point that out than Vice itself. Looking at the site’s Twitter feed, Vice.com’s headlines are an exercise in hipster bragging rights.

Which is probably why parody Twitter @Vice_Is_Hip has gained more than 13,000 followers since it showed up last week. Even its Twitter bio (“We’re cool because you’re shit”) is bitingly realistic.

“They were killing anyone wearing a leotard”: We meet the exiled Venezuelan gymnasts forced to flee their country disguised as carpets

We spent a week killing corrupt mobile phone factory owners in Bolivia with Nicki Minaj, and then blamed it all on Facebook

We tried to sell used scud missiles to urban outfitters

The formula is simple: Take an obscure location (Beirut; North Korea; Kanye West’s backyard), add an activity that prioritises hipster cred over human compassion, and deliver it with the attitude of Saturday Night Live’s Stefon. It’s already getting to the point where @Vice_Is_Hip tweets are almost indistinguishable from the real thing. Unless this recent @VICE tweet is a case of life imitating art, in a horrifying Möbius loop of self-referentialism:

Getting Tattooed by an Irishman in a Secret Tattoo Parlor in Cairo https://t.co/xGhqfMezxx

Vice_Is_Hip is just the latest in a long line of hilariously (depressingly?) accurate parody Twitters. Take Upworthy‘s Up Worth It, for instance. @NYTOnIt (The Times Is on It) is probably the cruelest, pointing out the New York Times’ most obvious and seemingly unnecessary news stories:

GUYS, there is still some gentrification happening in Williamsburg, and The Times is ON IT. https://t.co/GxB7cZlz4V

Still, there’s something about Vice_Is_Hip that’s just slightly… worrying. As Xeni Jardin recently tweeted, “In the wake of @horse_ebooks”—read that full story here and here, by the way—“I’ll be sad if @Vice_Is_Hip turns out to be just plain old Vice.” (There’s already a real-or-fake Vice headline quiz.) Yes, there’s now that slight concern that maybe, just maybe, Vice_Is_Hip is just another layer of trolling from Vice itself. Here’s hoping it isn’t. We’re not sure if we could handle that level of irony.

Editor’s note: Vice and the Daily Dot have a syndication deal.