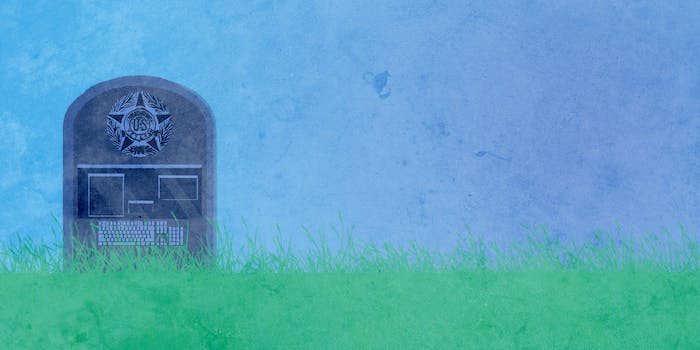 For veterans, Facebook is a digital cemetery—and a lifeline

Long after being reassigned or discharged, veterans connect on Facebook when they need it most.

I have never been a Facebook fan, but what keeps drawing me back is the accounting of men I used to serve with in Afghanistan. It’s the social media version of an obituary section in a small town, combined with the occasional cry for help.

A friend of mine reached out on Facebook a few weeks ago by thanking every soldier he respected from the old days. My wife pointed out his posts to me, and my blood ran cold. Suicide has plagued my former company, and the thought of him giving his regards made me think he was making his peace with God. What would normally be a “thanks, man” moment turned into a terrified jump towards seldom-perused social media platforms like Facebook. He is one of the finest soldiers I know and friend, and I had to at least try to figure out what he was thinking before it was too late. We rarely spoke anymore, as distance and time took their toll, but none of that mattered considering the respect, appreciation, and even a degree of hero worship I had for him.

Suicide has plagued my former company, and the thought of him giving his regards made me think he was making his peace with God.

It is a far cry from the old days of rotary phones and snail mail. Social media has made keeping a list of addresses and phone numbers redundant, and that’s a good thing. Military units, especially those deployed overseas, are fundamentally amorphous. Men and women come and go, are killed or wounded, reassigned or discharged. There is some irony in that one of the most ossified institutions in American life is also one of the most transitory.

At the same time, there is no experience more permanent, the psychological equivalent of a tattoo. A few bullets flying past your head provides a unique form of clarity, and whatever you think of the community that forms from it, it is always there.

Every Memorial Day, what is normally a hive of stupid jokes and complaining about day-to-day affairs turns into a shrine on social media. Photos of booze turn into tributes for the dead and broken. Photos of men who have died, either by the enemy or their own hand, start flooding across our feeds.

I am not new to bad news arriving over Facebook. Over the years, I have been informed of the death of friend after friend on social media, and it was almost always suicide. I started to avoid the platform because the news was too often grim. Others have reached out when life was bringing them down more than usual, and I tried to console them the best I could. But this recent cry for help in particular left me filled with horror. If he went down that road, what hope did the rest of us have?

Social media is not exactly noted for its nuance. Several men I knew were unrelentingly positive in their posts right up until the end, leaving their friends and family with nary a clue. One night a friend showed off the cookies he had baked with his children; a day later, he was dead. The sheer superficiality of most online interaction makes analyzing real feelings nearly impossible.

This stupid social media feature I had always sneered at turned into an evening with an old friend when he needed it most.

After a panicked outreach to my friend, where I found myself staring at the IM icon on my phone praying it was not too late, I received my first call on FaceTime. The family man with a successful Army career and the universal respect of his colleagues was feeling very low, and he wanted to reach out to others who had patrolled the rocky hills of his youth. For two hours we discussed the “old days,” dead friends, and the foibles of ourselves and others over several glasses of whiskey. Now, this stupid social media feature I had always sneered at turned into an evening with an old friend when he needed it most.

When the conversation ended, he hung up laughing, and the terror I was feeling over his fate finally went away. He was going to be all right.

For once, Facebook was a measure of hope and brotherhood, instead of crappy memes and birthday notifications of dead men.

Stephen Carlson has written about the military and veterans for the Washington Post’s Checkpoint blog, Task & Purpose, and We Are The Mighty. He served two tours in Afghanistan with the U.S. Army’s 10th Mountain Division. Follow him on Twitter @swcarlson1.