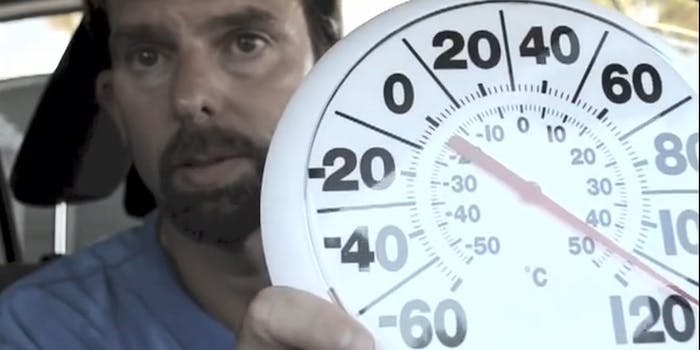 Cars get hot in the summer, but they can’t possibly get hot enough to really harm pets, right? Wrong.

A veterinarian named Dr. Ernie Ward put himself through the ordeal of sitting in a parked car for 30 minutes in a clip on his YouTube channel. While all windows were rolled down an inch, the temperature still reached 117 degrees Fahrenheit in just half an hour. The outside temperature at the beginning of the experiment was 95.

North Carolina–based Ward pointed out that heat was more than enough to kill dogs. He conceded that he couldn’t really know exactly what dogs go through when locked in cars. While he can perspire to keep cool and knows what is happening, dogs can’t and don’t.

While Ward posted the video a year ago, it gained traction once again after it was shared to Reddit’s r/videos section, gathering 184,000 views in around a day.

Redditors pointed out the temperatures in cars can be 20 degrees hotter than outside. One noted that it reached 135 in his or her vehicle last summer.