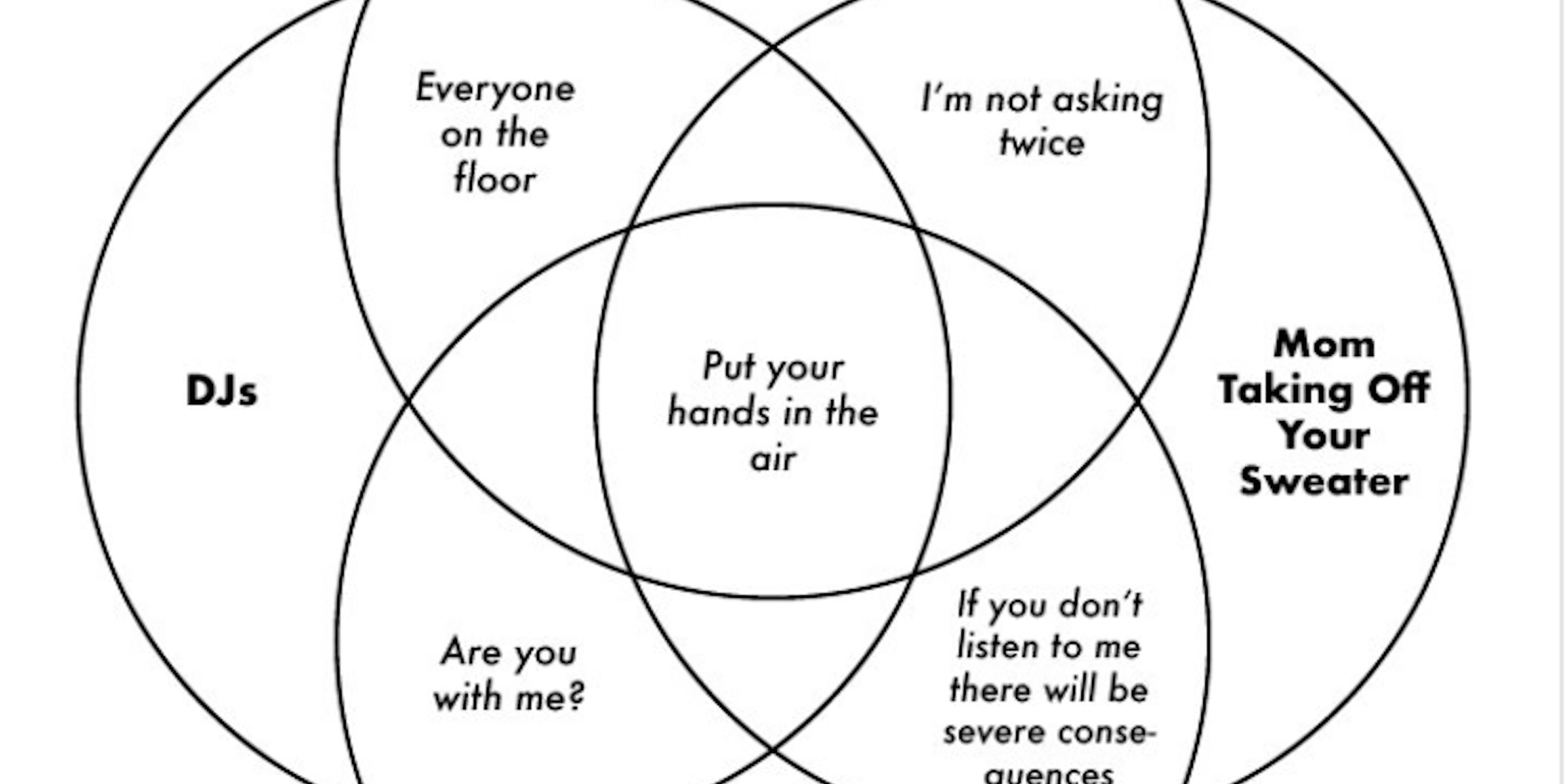 Venn diagrams are back and more viral than ever.

We’ve seen the resurgence of handshake memes in the last month, which use object labeling to show how different groups of people can agree on a topic. The meme began with stock photos of a business handshake before people started using other images, like a screengrab of the Predator handshake and stock photos of several hands crossed together. Another meme follows the same concept for the handshake meme but with a visual that people have been using since before the existence of the internet: a Venn diagram.

The above Venn diagram, which Adam Levy posted to Twitter on Aug. 20, shows what preachers, DJs, and bank robbers have in common. Both DJs and bank robbers say “everybody on the floor,” while preachers and DJs say “are you with me?” All three groups say: “Put your hands up.”

The original tweet received more than 7,000 likes, but it was shared across multiple other Twitter accounts, inspiring jokes and edited versions of the Venn diagram.

I’ve never seen a better use of a Venn Diagram in this life. pic.twitter.com/zHyfyMG40l

People keep sending me this Venn diagram and it keeps evolving every time I can’t handle this one pic.twitter.com/L2m878bY7H

I added a layer to that "Put your hands in the air" Venn diagram going around. pic.twitter.com/1cvixMOyqg

A Venn Diagram of Five pic.twitter.com/6owjuAnQgE

So what’s the story behind this viral Venn diagram? Levy detailed the inspiration for it in a series of tweets last week. It started, as all the best ideas do, in a group text.

Whipped it together in google slides, achieved the lulz pic.twitter.com/jDCJI31AdF

Levy created the diagram in Google Slides before a friend sent the image to a Facebook meme group.

most important take away from this is that it looks like the route was NOT twitter -> the world, but rather FB meme group -> the world. We're downstream from them.

The behind-the-scenes process of making a meme gain traction is not something that people usually divulge. Levy’s Venn diagram was originally posted to Twitter, but it went viral thanks to a Facebook meme group. After that, the image made it back to Twitter. And now people are busy making their own Venn diagrams. Apparently, this old-fashioned way of finding commonalities between different sets is still a good medium for telling jokes.