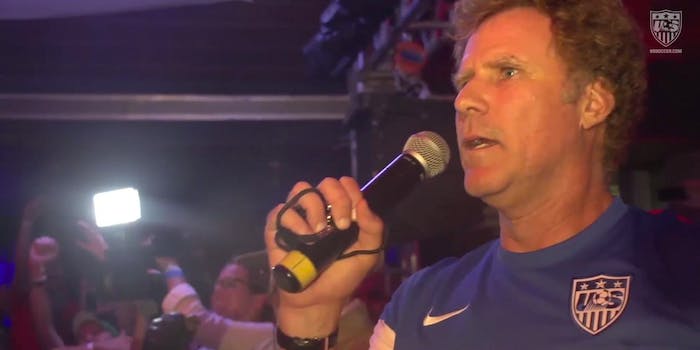 That's what you call team spirit.

America’s secret weapon for advancing to the Round of 16 isn’t Clint Dempsey’s foot, but Will Ferrell’s mouth.

On the eve of the highly anticipated U.S. vs. Germany World Cup game, the comedy legend made a surprise appearance alongside Teddy Goalsevelt in Recife, Brazil. During a #FanHQ party, Sunil Gulati, president of the U.S. Soccer Federation, announced that under FIFA rules, the U.S. could sub in a player for the injured Jozy Altidore.

The surprise substitution was none other than the Anchorman himself, Will Ferrell. Ferrell, prepared to pull out a win for the U.S. at all costs, proudly proclaimed to the crowd, “I will bite every German player if I have to!” That’s what you call team spirit.

Incidentally, news broke this morning that the World Cup’s notorious biter, Luis Suarez, has been banned from the field for nine matches and four months.