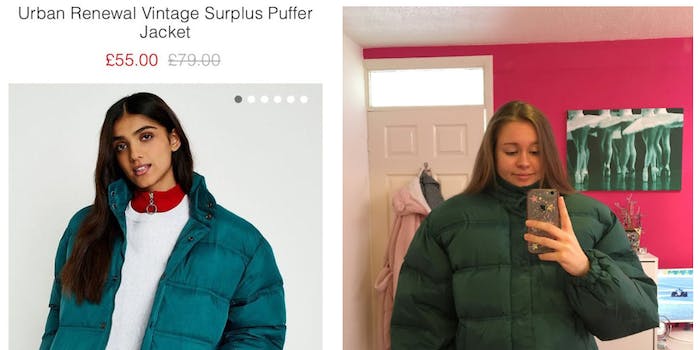 There's a reason why those jackets are called 'puffers.'

There’s always a certain degree of risk involved with online shopping—and one Urban Outfitters shopper learned that what you see isn’t always what you get when you base your expectations off the clothing brand’s photos online.

A woman named Becky Latham shared a photo of herself wearing Urban Outfitter’s renewal vintage puffer jacket—which cost almost $70—and compared it with how the brand advertised it. There’s quite a difference.

“Thank you @UrbanOutfitters it’s exactly like I imagined,” she tweeted.

Latham’s hilarious tweet went viral, with tons of people responding to her with jokes about the jacket, many making pop culture references to characters like Violet Beauregarde, the girl who turns into a blueberry in Charlie and the Chocolate Factory. Her tweet has been retweeted over 45,000 times and liked over 135,000 times.

Urban Outfitters has yet to publicly comment about the jacket fiasco, but Latham tweeted to one user that she decided to return the puffer. To its credit, the company notes that the jacket “runs large” under the sizing information. No kidding.