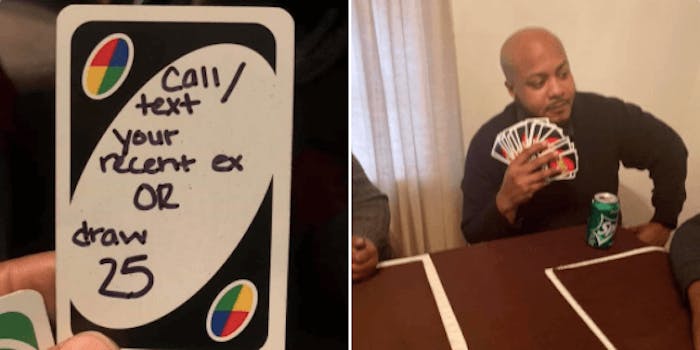 Someone turned Uno into a meme. It’s too relatable

Twitter users are using the card game Uno to meme their most relatable moments. Using Uno’s infamous “draw four” card, people are challenging their followers to do something they hate—or draw 25.

According to Know Your Meme, the “draw 25” meme started when Facebook user Damien Jones posted a photo this month of an Uno card reading “call/text your recent ex or draw 25,” alongside a photo of a man holding a large handful of Uno cards. Jones captioned his post “say no more” and it has been shared over 195,000 times.

People are using the “draw 25” format to share everything from pop culture references to parenting memes. One redditor inserted Michael Scott into the meme and captioned it “get along with Toby or draw 25.” (On The Office, Scott held a deep and unfounded hatred of Toby.)

One user memed the universal experience of unrequited love. “Date me or draw 25” the card reads.

Twitter user @BenitezO464 tweeted a photo of a golden retriever, with the card reading “show me what’s in your mouth or draw 25.”

From sports geeks to anime fans, the format is a crossover hit.

Users on all social media platforms are loving the “draw 25” meme format and sharing their most relatable opinions. Perhaps we’ll see Phase 10 get the same meme treatment next.