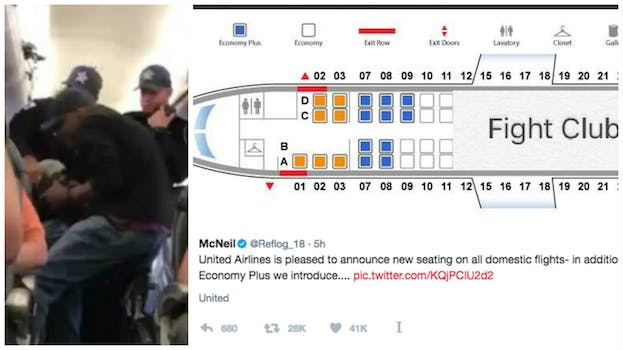 The internet is ... united in making fun of them.

Late last night and early this morning, Americans of every ilk were absolutely appalled when videos were released showing police physically removing a man off a United Airlines flight that was overbooked.

It led to outrage, indignation, and memes.

Oh yes, much like United dragged that poor man, the internet dragged United right back.

Perhaps the most savage burn was from an NFL player. Cognizant of speaking up about public issues in the wake of Colin Kaepernick, this was just too ripe to pass up.

Dear #united, I had to "re-accommodate" someone once pic.twitter.com/MP3ZJDv85m

Others took the tactic of revamping United’s website and seat offerings.

United Airlines is pleased to announce new seating on all domestic flights- in addition to United First and Economy Plus we introduce…. pic.twitter.com/KQjPClU2d2

Huh, never noticed these options on the United website until this morning pic.twitter.com/cP8LpIFEP1

Or what about just giving the airline all new pilots and flight attendants?

Widespread mockery is really the only way to respond (well, save for using sympathy and restraint—but come on, lol, when has that ever happened? It’s much easier to do more memes.)

United has a new logo pic.twitter.com/5rgYFElUWa

.@United has just updated their website with helpful info for all passengers. pic.twitter.com/NlLCnTCaHC

Getting ready for my United Airlines flight. pic.twitter.com/UX9j7lLPft

We are also getting some pretty solid crossover meme action on this one.

Now, that’s good (which relates to this morning’s other absurd police story.)

While the victim will surely recover from his wounds, United may not.