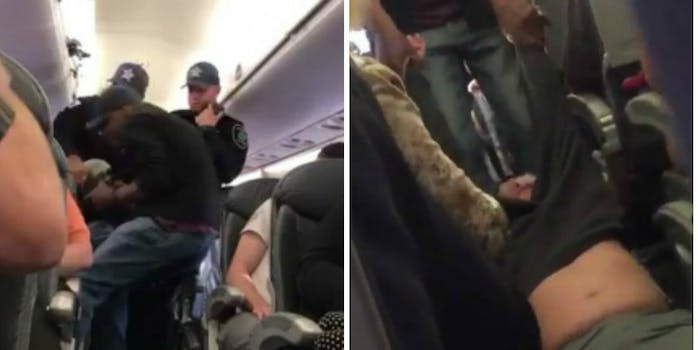 A disturbing video posted to Facebook on Sunday night showed police forcibly removing a passenger from a United Airlines flight after the plane was overbooked and not enough volunteers gave up their seats to allow the aircraft to depart.

The video was posted by Audrey Bridges, who wrote, “Please share this video. We are on this flight. United [A]irlines overbooked the flight. They randomly selected people to kick off so their standby crew could have a seat. This man is a doctor and has to be at the hospital in the morning. He did not want to get off. We are all shaky and so disgusted. #unitedairways”

In the first 12 hours after the video was posted, it had been viewed 154,000 times. Here’s another viewpoint.

@United overbook #flight3411 and decided to force random passengers off the plane. Here's how they did it: pic.twitter.com/QfefM8X2cW

According to the Louisville Courier Journal, the flight was headed from Chicago to Louisville, but since it was overbooked, United offered $400 and a hotel voucher to any passengers who willingly gave up their seat for four airline employees who were on standby and who reportedly had to be in Louisville on Monday for a flight. The offer was later upped to $800.

When nobody volunteered, a United official reportedly told the passengers that a computer would select four people to be deplaned.

The man in the video reportedly said he was a doctor and had patients in Louisville to see Monday, and though Bridges told the newspaper the man said he was calling his lawyer, police boarded the plane and dragged him away as some passengers expressed shock.

One self-identified passenger said the man was bloodied after his face was slammed against an armrest.The Courier Journal reports:

“The man was able to get back on the plane after initially being taken off—his face was bloody and he seemed disoriented, Bridges said, and he ran to the back of the plane. Passengers asked to get off the plane as a medical crew came on to deal with the passenger, she said, and passengers were then told to go back to the gate so that officials could ‘tidy up’ the plane before taking off.”

This was United’s response early Monday morning on Twitter.

We apologize for the overbook situation. Further details on the removed customer should be directed to authorities. ^RD

We apologize for the overbook situation. Further details on the removed customer should be directed to authorities. ^RD

Flight 3411 from Chicago to Louisville was overbooked. After our team looked for volunteers, one customer refused to leave ^MD

the aircraft voluntarily and law enforcement was asked to come to the gate. ^MD

“Flight 3411 from Chicago to Louisville was overbooked,” a United spokesperson told the newspaper in an extended statement. “After our team looked for volunteers, one customer refused to leave the aircraft voluntarily and law enforcement was asked to come to the gate. We apologize for the overbook situation. Further details on the removed customer should be directed to authorities.”

United also was embroiled in controversy last month when it refused to allow young girls to board because they were wearing leggings.