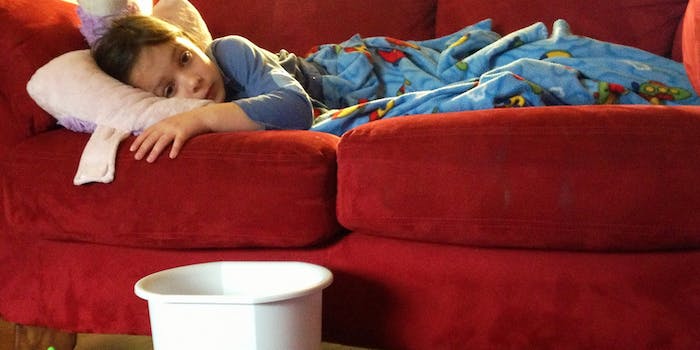 The U.K. government wants citizens to describe their vomit on Twitter

A request from the British government: This season, if you find yourself afflicted with a winter bug—as thousands inevitably will—please tweet the color and texture of your vomit.

This year, the U.K.’s Food Standards Agency will be tracking the spread of the common norovirus on Twitter, the Guardian reported. The agency’s goal is to be able to identify norovirus outbreaks much earlier than they have previously been able to through traditional channels like government reports.

Norovirus is U.K.’s most common stomach bug. It infects as many as 1,000,000 people each year, causing diarrhea and vomiting. Currently, there is no known cure for the unpleasant virus.

The FSA may be onto something. Its researchers analyzed last years norovirus outbreak, comparing reports of the virus to location specific tweets containing tags like #barf and #flu. “We found that the changes in the number of tweets using symptom keywords predicted the increase in lab reports at the start of the annual peak in human cases,” FSA social media manager James Baker told the Guardian.

The virus is contagious for the first 12 to 48 hours after it is contracted. The agency’s hope is that by identifying outbreaks as they happen, they can disseminate information to problematic areas about how to prevent its spread.

The U.K. National Health Service recommends that those infected stay indoors, keep hydrated, and avoid going to the doctor, as there is no cure.