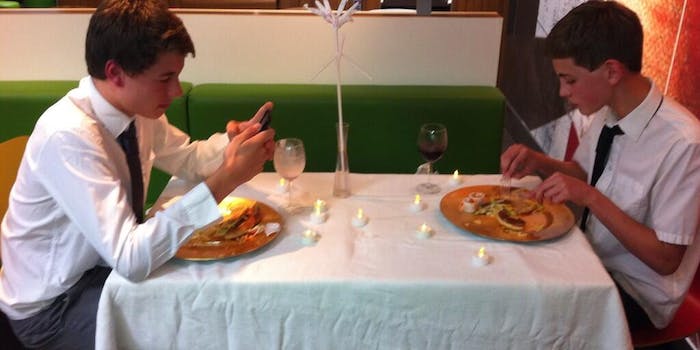 This teen prank is totally worth getting banned from McDonald’s

McDonald’s is still not a fine dining establishment–despite the efforts of three British teenagers and their Twitter accounts.

On September 13, teenage friends William Peachey, Cameron Ford, and Adam Welland headed to their local McDonald’s in Kingston-Upon-Thames, a neighborhood in southwest London, for some cheap grub. Apparently fed up with the cellophane paper and bland cardboard that Big Macs, McNuggets, and fries are traditionally served on, the teens decided to class up their fast food experience.

Who would have thought that classing up McDonald’s would have gone so well? pic.twitter.com/ndvMSxosLf

Fellow patrons and McDonald’s staff alike were speechless when Peachey, Ford, and Welland—decked out in shirts and ties—decorated a table with a tablecloth, candles, cutlery, and even wine glasses.

Here’s something: Me and my friend, sharing a chip over a candlelit McDonald’s dinner @will_peachey @CameronDFord pic.twitter.com/mHWbGjJgXj

Unfortunately, their attempt at classiness was short-lived—much like a Quarter Pounder in one’s digestive system.

Just got banned from McDonald’s for doing this #worthit pic.twitter.com/ZB6TV1Ixua

The photographs of the friends’ stunt—and subsequent banishment-—quickly spread across Twitter. Before long, news outlets such as the Daily Mail and the UK Metro were sharing the story.

@NICKXSIERRA we barely planned it and its gone fucking viral 😂😂

@HLNdevon for us it was the cutlery, they didn’t like us using our own. Forking idiots

As for McDonald’s itself?

“We are aware of the two customers who dined at our Kingston restaurant on Saturday night and are pleased that we were able to offer them an affordable treat. ‘We are happy to provide plastic cutlery to those customers who request it. We ask that any items brought in by customers, such as cups or plates, are used responsibly and taken away with them after use,” the company said in a statement to the Daily Mail.

While the corporation itself was more or less “meh” on the situation, the Kingston McDonald’s itself took a necessary precaution.

Fuck. McDonald’s has got a bouncer here now. Gonna get mullered if we have any more romantic meal appa pic.twitter.com/ajhY3J9Rat

According to Welland, the trio is taking suggestions for performing similar stunts at other locations. Perhaps they can take some of that complementary plastic cutlery and dine at a Four Seasons Hotel’s restaurant.