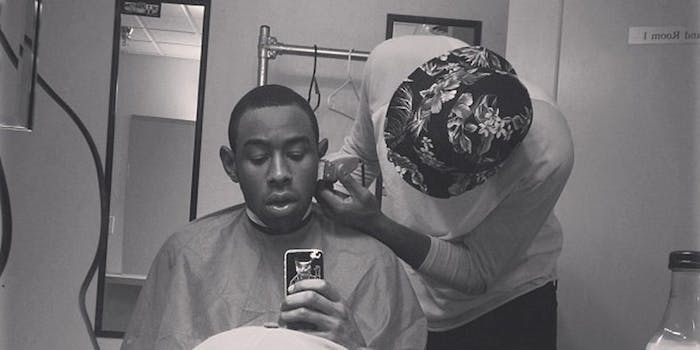 Rapper Tyler the Creator could face up to a year in jail and a $4,000 fine.

Rapper Tyler the Creator could face up to a year in jail and a $4,000 fine for allegedly inciting a riot Thursday during a performance at South By Southwest.

If this Instagram video of the incident is any indication, Tyler, whose legal name is Tyler Okonma, will have a tough time avoiding either punishment.

The video shows Okonma on stage in a green T-shirt and hat yelling “Just run in right now. F**king do it. Let’s go” as a crowd of people violently push each other to get inside the Scoot Inn in downtown Austin. The clip was captured by Thrasher Mag, a skateboarding publication, and has spread rapidly across Instagram, gathering 18,000 likes.

Okonma, 23, was arrested at the Austin-Bergstrom Airport Saturday. His bail was set at $25,000. The following photo from Reddit user J-Evs allegedly shows Okonma getting cuffed at the airport. Okonma was scheduled to perform Friday at SXSW but cancelled the show following the incident Thursday.

I DONT WANT TO CAUSE ANY TROUBLE, SOME ARE MAKING ME OUT TO BE A BAD GUY, SO IM NOT DOING ANY SHOWS TONIGHT. BE SAFE HAVE FUN ASSHOLES!

This isn’t the first time Okonma or his group Odd Future have started up trouble. Since the group was started in 2007, they have been linked to acts of vandalism and inciting violence.

In February, the group were barred from entering New Zealand because immigration officials “deemed [them] to be a potential threat to public order and the public interest for several reasons, including incidents at past performances in which they have incited violence,” Rolling Stone reported.

Not surprisingly, the Okonma mugshot is already starring in some remixes. Reddit’s rap community r/hiphopheads made this one: Photo by Tyler the Creator/Instagram