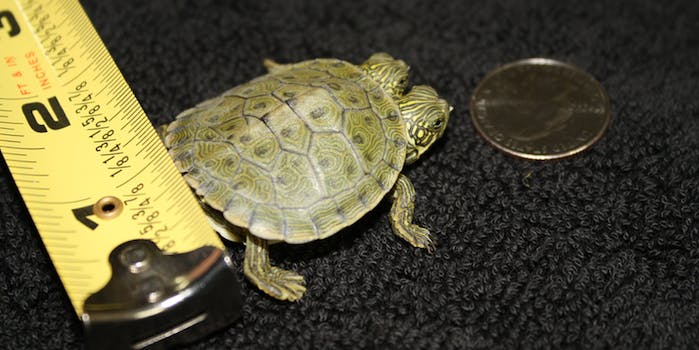 This two-headed turtle has more Facebook friends than you do

A two-headed turtle named Thelma and Louise has become the celebrity of the San Antonio Zoo and taken Facebook by storm.

Ah, Internet culture, formed on the back of viral oddities, spectacle, and cute little animals.

You might say it’s two-headed turtles all the way down.

At least that’s what the Internet is hot for this week, after a tiny Texas River Cooter, has turned heads by sporting two of its own—heads, that is. The two heads, dubbed Thelma and Louise, have been getting along swimmingly according to reports from the San Antonio Zoo, where the turtle hatched last month. The Texas Cooter, a.k.a. Pseudemys texana, is generally known for its green color and vivid stripes. This one, however, is known for its turtle activism. “We support turtle friendly communities!” the turtles instruct their audience on Facebook. “Please, give a turtle a hand when you see one of us crossing the road…we just aren’t fast enough to get out of the way.”

On Facebook, over 3,000 people have “liked” the turtle’s fan page since it was created last week. The turtle seems to have dubbed its turtle fandom the “Turtledome,” and lists itself as having attended the University of Turtledome and Slider High School—sliders being the name for a closely-related genus of turtle for which the Texas Cooter is often mistaken.

“So yes, your worst fears are realized,” snarked Breaking Satire in response to the climbing social stats. “A two-headed turtle has more friends than you do.”

Thelma and Louise is currently making the rounds on Twitter, garnering admirers and gawkers alike, and, naturally, inspiring terror in its own cute way.

Although currently barely an inch in diameter, the turtle will most likely grow to over a foot in size. Already, Thelma and Louise have defied the odds—most two-headed organisms fail to survive long after birth. But in the careful sheltered environment, they’re thriving.

And it’s no wonder. San Antonio zoologists are, among other conservation efforts, attempting to breed dangerous black rhinos, a feat which makes hand-feeding pellets to two-headed turtles seem mundane by comparison.

But the zoo has embraced its mutant celebrity, inviting fans to drop by and see the turtle. The birth is a welcome pick-me-up for the zoo, which lost a 59-year-old Asian elephant in March.

If all goes well, Thelma and Louise could live to delight audiences for up to 75 years.