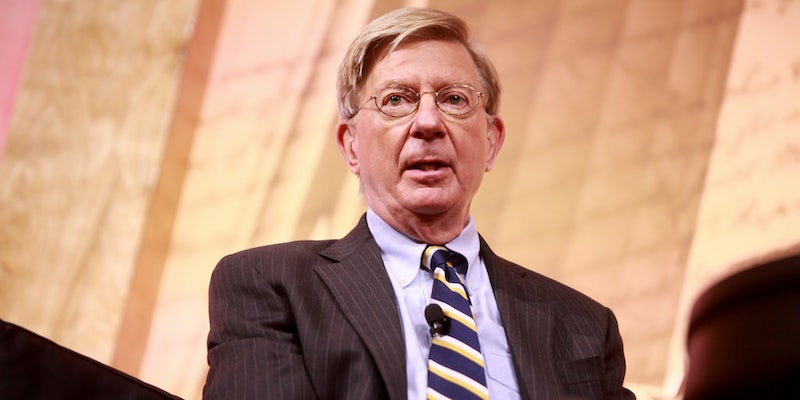 George Will, the tribe has spoken.

The Washington Post’s George Will recently unleashed a passionate defense of the American university’s right for freedom from government intervention. Was Will concerned about state suppression of unpopular political opinions in classrooms? Worried that the government might start mandating university curricula?

No, Will doesn’t like the fact that universities are taking steps to combat sexual assault on campus:

Academia’s progressivism has rendered it intellectually defenseless now that progressivism’s achievement, the regulatory state, has decided it is academia’s turn to be broken to government’s saddle. Consider the supposed campus epidemic of rape, a.k.a. ‘sexual assault.’… The Obama administration is riding to the rescue of “sexual assault” victims. It vows to excavate equities from the ambiguities of the hookup culture, this cocktail of hormones, alcohol and the faux sophistication of today’s prolonged adolescence of especially privileged young adults.

George Will apparently imagines that universities are only trying to stop sexual assault on campus because the federal government is forcing them, because why else? (He seems to be referring largely to the White House Task Force to Protect Students from Sexual Assault.) Will’s essay also throws in some panic about trigger warnings on syllabi (which, to my knowledge, no university administration is mandating and regarding which no federal regulations have been proposed or enacted), microaggressions (also yet to inspire a government-mandated intervention), and a federal initiative to rate the quality of universities.

George Will’s misunderstandings about sexual assault are numerous and astoundingly ignorant. He continually uses “sexual assault” in scare quotes as though its very existence is dubious to him. He insists that if a man continues having sex with a woman after she said “no” several times, it cannot be rape, because she had willingly had sex with him in the past. He calls definitions of sexual assault that include non-consensual touching as well as non-consensual penetration “capacious,” as though using someone else’s body sexually without their consent is somehow not assault and never traumatic just because it doesn’t involve both a penis and a vagina. He denies that intoxication renders one incapable of giving informed consent, even though it’s fairly well-known that people who are drunk don’t always know or understand what they’re doing.

He even refers to women as “females,” cementing my belief that he belongs in an episode of Star Trek and not in the real world, let alone on the staff of an award-winning newspaper.

But perhaps his most egregiously out-of-touch statement is that “when [universities] make victimhood a coveted status that confers privileges, victims proliferate.” Will does not elaborate on what, exactly, is so “coveted” about being a victim of sexual assault, how exactly universities “confer privileges” upon students who come forward about their assaults, or how these privileges, supposing they exist, are what is driving the supposed “proliferation” of “victims.” Evidence is less of a priority than rhetoric, apparently.

Luckily, Twitter users have stepped in where Will has failed to explain what “survivor privilege” looks like. The #survivorprivilege hashtag catalogues survivors’ experiences with rape in college and just how “coveted” that status is:

Where’s my survivor privilege? Was expelled & have $10,000s of private student loans used to attend school that didn’t care I was raped.

Yes, @georgeWillf, going through HIV prophylaxis after being raped & not being able to tell your family isn’t hell, it’s #SurvivorPrivilege

#SurvivorPrivilege was being told to go home, be safe & put *my* education on hold — so that my rapist could comfortably conclude his

If you actually follow the news about campus sexual assault, you’ll come across dozens of stories about college students reporting rape and getting anything but “privilege” as a result. Some are involuntarily sent to the hospital, “encouraged” to take a quarter off, or submitted to invasive and inappropriate questioning.

At Columbia University, administrators demanded that Emma Sulkowicz explain how she could’ve been anally raped without lubrication, asserting that there was no way that what she had survived could have happened.

At Amherst College, Angie Epifano was not allowed to switch dorms after being raped by another student and was discouraged from pressing charges; the school’s sexual assault counselor reportedly asked her if it was “really rape.”

At Yale University, Alexandra Brodsky was similarly encouraged to keep quiet after being sexually assaulted, and administrators seemed to view the incident as a “misunderstanding.”

At Indiana University, Margaux J. dropped out of school after the school found her rapist guilty but refused to expel him, choosing instead to suspend him for the summer semester that most students do not attend anyway.

At Tufts University, Wagatwe Wanjuki tried persistently to get the university’s student judicial process to pursue her claim of sexual assault; they dropped the case with no explanation or even a hearing.

At Northwestern University, Lauren Buxbaum was pressured by administrators to take a medical leave that she did not want following a sexual assault.

At the University of North Carolina, Andrea Pino did apply for a medical leave after being raped, but the school’s academic advising office accused her of being “lazy.”

At Northwestern University, a student accused a professor of sexual assault. A committee assigned to investigate the incident found the claims credible, but the university did nothing.

While there are plenty of cases in which universities handle claims of sexual assault properly and give survivors the support they deserve, stories like these are not uncommon. And besides, being respected and supported following an assault is not a “privilege” or shouldn’t be. It should be a right.

Will warns that if universities allow the government to get involved in sexual assault prevention, this will “diminish their autonomy, resources, prestige and comity.” He blames this on “progressivism.” Will neglects to explain how exactly this will happen or to provide any examples of how this is happening currently.

Conservatives like Will love to warn bombastically of dire consequences if particular progressive reforms are enacted, but they ignore the terrible things that are happening already. Will may quibble over the statistics on campus sexual assault, but if you speak to any small group of college women (and, in fact, many small groups of college men), you will find at least one who has been sexually assaulted.

It is not rare. It is happening now, and many of the survivors are finding that they have no choice but to continue to live and study next to their rapists, who often go on to victimize others.

Will imagines horrific worst-case scenarios that will befall universities if they attempt to curtail sexual assault, but the stories shared on the #survivorprivilege hashtag show that too many young students are already living actual worst-case scenarios. The fundamental disagreement between Will and advocates against sexual assault is not, as he believes, about the proper role of government in the regulation of higher education, but about whether or not sexual assault even exists outside of the “legitimate” and “forceful” sort perpetrated by strangers in alleys. The hackneyed anti-government rhetoric in the piece seems as though it’s there mainly as a smokescreen to conceal (ineptly) the fact that Will knows virtually nothing about sexual assault and doesn’t care much about its “privileged” victims.

If there’s any indication of privilege here, it’s his own.