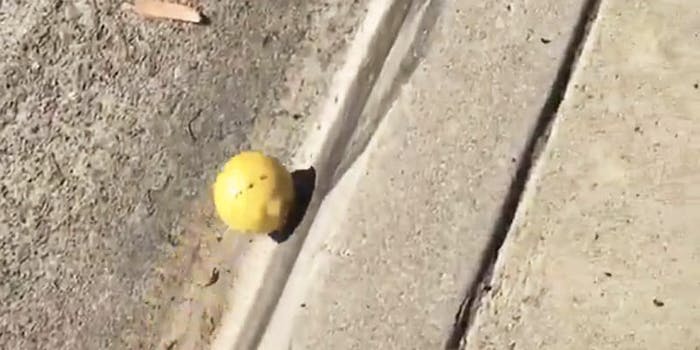 Sometimes, it’s the little things that make life worth living. A nice cup of coffee on a quiet Sunday morning, for example. Or the feeling of crawling into a bed with freshly laundered sheets. Or sometimes, it’s watching a lemon rolling down the street.

That’s what happened to San Diego-based writer and photographer Mike Sakasegawa, who witnessed an errant lemon rolling down the street while walking home from a run. He writes on Twitter that he followed it for about a quarter of a mile, documenting nearly two minutes of its journey on video before it came to an eventual stop. (Sorry, spoiler alert!)

Today as I was walking home after my run I saw a large lemon rolling down the hill. It kept rolling for about a quarter mile. And now you can see it, too. pic.twitter.com/dQoHi4RrXS

In the less than 24 hours since the video was posted to Twitter, its been viewed over 1.3 million times (at the time of this writing) with over 18,000 retweets 63,000 likes. For some odd reason, people find footage of a lemon slowly rolling down a hill super mesmerizing.

This is like the lowest possible stakes version of the video where the snakes chase the lizard and I got weirdly invested in it. https://t.co/xqge4Zndca

This video is an emotional rollercoaster https://t.co/mgpjHiVSwG

when life gives u lemons

when life gives u Lemon

I would pay for this tv channel. https://t.co/Qnyn18VhjP

Although the end of the video seems oddly relatable and depressing—as in that lemon is all of us, giving up in 2018—fear not, because the story has a happy ending. Sakasegawa retrieved the poor lemon from the gutter and it now lives intact in his kitchen, although he’s not sure what he’s going to do with it yet.

I felt bad about leaving the large lemon in the gutter so I went back, retrieved it, took it home, and washed it off. pic.twitter.com/iqWxuQuCiL

Look at this absolute unit. pic.twitter.com/TU8G0HkVHC

And then this happened:

Paul F Tompkins and Ted Leo are talking about my silly lemon video. What is happening. pic.twitter.com/8MLWhkHDpW

Yes, agreed. Motion to only allow lemon-related content on Twitter going forward. Clearly, it will pass in a landslide.