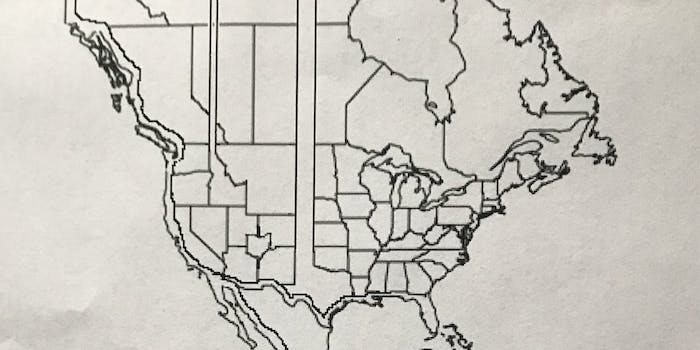 The Western Hemisphere was severely shaken up recently, and although the work is purely fictional (for now) Twitter is standing still standing around with its collective jaw hanging open.

A 16-year-old girl named Anna has created a map of North and South America that’s so buck wild that literally hundreds of thousands of people have been equally blown away and confused.

The map was posted to Twitter by her father, sports journalist Craig Calcaterra. Calcaterra says he discovered the map after asking his Anna if she had any homework. She said she did not, but “[I] have a map I’m working on”. The next day he discovered her brilliant dystopian vision of the future.

While there is no part of this map that isn’t amazing let’s point out just a few highlights:

Naturally, people had a lot of questions.

Good news though, Anna had answers for us. Bad news: they really only lead to more questions.

Firstly, the removal of Wyoming seems to have something to do with a mysterious personal grudge/belief that the state might not even exist.

She also, kind of, cleared up the mystery of “Ohio 2”

And finally dropped this chilling thought bomb on all of us.

That’s right, perhaps the true dystopian future is the one we’re living in right now.

Enjoy picking your brains up off the floor.