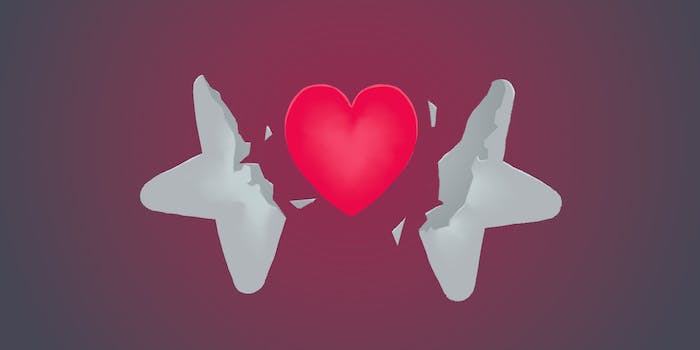 Why the Internet has no love for Twitter’s ‘like’ button

Twitter just broke hearts all over social media, but the real reason may surprise you.

Twitter doesn’t have any love for its users, apparently. But the platform does at least have a heart—or, as they call it now, a “like.”

On Tuesday morning, with a simple tweet, the company announced one of the biggest changes to its platform yet. The “favorite” button—symbolized by a grey star that illuminates in gold when clicked—runs synonymous with the platform’s brand identity. It’s a feature that, along with the 140 character limit and retweeting ability, solidly defined Twitter as a distinct, crucial player for social media in its early days. But now, shortly after news that Facebook will soon roll out their “reaction” buttons in addition to their iconic “like” button (typified with the image of a blue and white “thumbs up” emoticon), it seems that Twitter decided to just go ahead and quickly put their heart on the line.

The switch from “favorite” to “like” runs counter to the company’s vision to eliminate any confusion or ambiguity about what it means to use the function. Calling it a “like” not only pushes Twitter into Facebook’s zone, it defeats the purpose of the button in the first place—and it is all because Twitter seems desperate to jumpstart their lagging efforts to attract new users.

You can say a lot with a heart. Introducing a new way to show how you feel on Twitter: https://t.co/WKBEmORXNW pic.twitter.com/G4ZGe0rDTP

One of the key distinctions between Twitter and Facebook was the “favorite” versus the “like.” Now, the two biggest social media platforms are all about the likes, even if their buttons still evidence a limited way of interacting or sharing sentiments with others on the Internet.

In a company blog post, product manager Akarshan Kumar explained that the star could have been potentially confusing to Twitter’s newcomers, whereas the heart “is a universal symbol that resonates across languages, cultures, and time zones.” He added, “The heart is more expressive, enabling you to convey a range of emotions and easily connect with people. And in our tests, we found that people loved it.”

Apologies to Kumar, but they may have gotten a terrible sample group—because there was nothing sweet about the initial “like” button reactions on Twitter. If anything, users are heartbroken that one of their favorite, most flexible features now represents way more than it should for any given interaction. Hearts remain strongly associated with “love,” something clear from the chalk-candy and chocolate boxes that make the commodified emotion a moneymaker on Valentine’s and Sweetest Days.

Yet the star-powered “favorite” button functions as a more easygoing way of either expressing approval, sharing empathy, a simple act of acknowledgment, or even for bookmarking purposes. That can’t be done with a heart, which symbolizes something much stronger, if not forced. A star, however, was much more efficient, and doesn’t carry the same emotional connotation or knee-jerk response as a heart. But even further, of all the things that Twitter could have called the new heart button, calling it a “like” veers from their established identity and moves more so into Facebook’s established system of one-click connection with fellow users.

BREAKING: Twitter to replace unpopular "heart" button with an "I choo-choo-choose you" button. pic.twitter.com/DQLPec4Zg1

Even as the Internet continues its chorus of farewells to the favorite/star button on Twitter, and the company adds it to video app Vine, this is about much more than a simple feature or as a matter of user experience. As with most any major decision from a tech giant, especially related to digital media, there is an intentional business strategy behind the move.

Twitter’s expressed concern with “isolating newcomers” serves as a targeted appeal to audiences they need most to survive in an increasingly competitive online space.

It could not be more clear. Twitter’s concern with isolating newcomers serves as a targeted appeal to the audiences they need most to survive in an increasingly competitive online space: mom, dad, Aunt Peggy and other people who are not millenials. Most young digital natives aren’t highly adopting Twitter anymore, rather they are clinging to Facebook or flocking to the likes of Instagram and Snapchat.

According to an August report from the Pew Research Center, 62 percent of the entire adult population uses Facebook, and 84 percent of digital natives have accounts, handily winning out against the many available social media platforms. For all other age categories, Facebook enjoys at or well above a 50 percent participation rate. Over at Instagram, which is owned by Facebook, the app enjoys the spoils of its parent company’s success. Roughly 55 percent of Internet users ages 18 to 29 have Instagram.

However, those numbers easily outdo Twitter, which established itself as a top player shortly after Facebook, but before Instagram.  Twenty-three percent of all Internet users have Twitter, but a relatively low 32 percent of digital natives between the ages of 18 and 29 use the platform. It’s clear, then, that they’re being outperformed on every measure, and needed to make a desperate move to encourage new user adoption, or risk becoming unprofitable and/or obsolete sooner rather than later.

For Twitter, the new “heart” button is an opportunity to attract new users of all ages, especially for the coveted demographic of emerging digital natives, and for older adults who may be more hesitant to adopt social media apps. By the numbers, the rates of adoption among users ages 30 and above is relatively the same for Twitter and Instagram, one of its biggest competitors. As for Snapchat, as an emerging competitor, it’s still fairly early in the game to draw conclusions.

But the best information available per Pew shows that 17 percent of all smartphone owners use Snapchat, best known for mobile messaging that automatically deletes sent messages. As it relates to the attractive digital native market, a September report from ComScore shows that 77 percent of millennials ages 18 to 34 use the app, making it the sixth most-popular mobile app in that age group.

Okay so Twitter has just changed the 'favourite' to like with a little love heart. That's cute

To be fair, there are some people who seem to appreciate the new “like” feature on Twitter, and the company did conduct testing before Tuesday’s rollout. However, they could stand to learn from their biggest competitor how to work with the community before changing a major feature. The new Facebook range of “like” reactions hasn’t hit the platform yet, but users know about it thanks to the company’s proactive press strategy.

If Twitter really has a heart, the company will tread more carefully when conceptualizing new features.

With a more community-centered approach, users had a chance to share their thoughts, which allows the company to tailor its next steps in a measured and responsible manner. By contrast, the Tuesday rollout from Twitter was bold, if not careless.

If Twitter really has a heart, the company will tread more carefully when conceptualizing new features, and how they communicate about this and other changes moving forward.