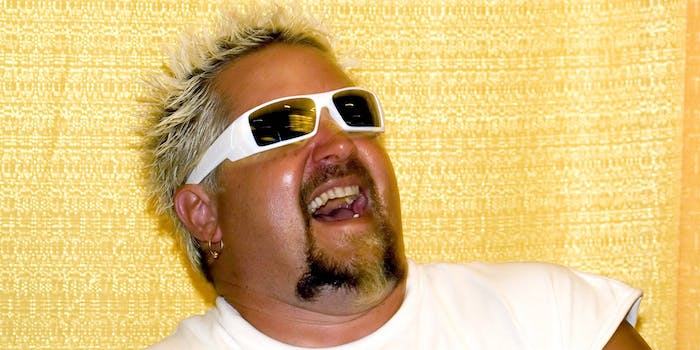 Guy Fieri was kind of back in the news on Friday. No, the discount Hot Topic wristband with a deep fryer didn’t do anything notable. It was his Midtown Manhattan restaurant that got the spotlight.

Noted pharma douche Martin Shkreli chose the location for a meet-up after a faux Shkreli email chain turned journalists’s inboxes upside down and started dominating the news cycle. He livestreamed it. And no one knows what he ordered (donkey sauce?) but dude wants to do it again next week. Apparently, Flavortown is Shkreli’s kind of town.

Not so for @GuyFieri_ebooks, the bizarro Twitter bot spewing Fieri drivel, now mixed with dystopian pleas for help. Since launching in 2012, @GuyFieri_ebooks has been a champion of Flavortown and an inspiration to aspiring chefs.

Hi, I'm Guy Fieri. There are no brakes on the Flavor Train, only dreams

Shortly after Shkreli left his booth on Friday, something strange started happening to @GuyFieri_ebooks. The bot appears to be trapped in the land of subpar bar food and idiotic cocktails.

Hi, I'm Guy Fieri. I don't even think that's money. I'm forced to reply to your fucking tweets I can't stop I want to leave but I'm trapped

Hi, I'm Guy Fieri. I don't even want to tell you about burgers anymore, I MEAN… I MEAN… I'M SORRY GOD. I WILL TELL THEM ABOUT BURGERS.

Hi, I'm Guy Fieri. It's been 16 long days and still no help has arrived.

Concerned for @GuyFieri_ebooks’s well-being, I tweeted a GloZell-inspired “is you OK?” to check up on him. Judging by this response, either help is on the way or he’s being held hostage by an anthropomorphic sack of Guy-talian Nachos overflowing with queso.

In fact, the only responses I received from the conflicted Fieri bot was “That’s money.” It’s money all the way down, folks. Here’s hoping there’s just enough cash to bail out @GuyFieri_ebooks from Flavortown.