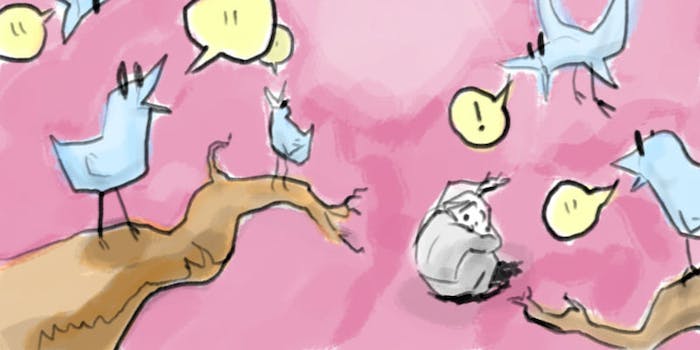 How Twitter is helping fight discrimination against sex workers

When sex workers are in trouble, Twitter rallies around them.

By now, you might have heard the story of Eden Alexander, the sex worker driven off crowdfunding site GiveForward by its payments processor WePay on the grounds that she was soliciting funds for “pornographic items,” after her friends set up a fundraiser to help with medical bills.

Her case electrified the Internet over the weekend as her colleagues and friends rushed to support her after a medical crisis caused in part by sex work phobia that led to delayed treatment for a serious bacterial infection. The rapid spread of her story and groundswell of support for her (a replacement fundraiser on Crowdtilt is already at close to $9,000 thanks to her publicity) is a fascinating illustration of the role of the sex work community on Twitter and social media—and the way in which the progressive community interacts with sex workers.

“Sex work Twitter,” as writer and activist Melissa Gira Grant calls it in her book Playing the Whore and a recent piece on the Eden Alexander case, consists of a diverse, lively, and active community of sex workers who interact not just on Twitter but other social media sites. Their shared experience in the sex industry creates common ground for rich conversations that, yes, sometimes are about sex work, but are also about other things as well. Like other minority groups on Twitter, they have their own jargon, hashtags, community ethics, and, critically, sense of solidarity.

When sex workers are in trouble, sex work Twitter rallies around them. Sex workers are quick to raise funds for those facing medical bills, funeral bills, legal bills, and other expenses, and they provide less tangible support as well. They turn out to support sex workers in court, they rally at protests and events, and they push back on conventional narratives about sex work and sex workers.

When Alexander’s case went public, it was sex work Twitter that promptly swung into action, with the #whorehobia hashtag to help them organize and rally around their peer. They pushed for a response from WePay and the company’s CEO, Bill Clerico, with a growing chorus against the company resulting in a response nearly 24 hours later, when Clerico hid behind vague “regulations” and “banking rules” in an attempt to defend himself, claiming that a retweet of a supporter’s offer of sexual services counted as a violation of the terms of service.

Somewhat unusually, sex work Twitter wasn’t left alone in the wind this time. Liberal and progressive activists also joined the outcry, and the situation has been heavily covered on sites like Jezebel and The Rumpus. It continues to occupy media narratives and conversations into this week, as the case becomes more and more complex—we now know that WePay conducts surveillance of campaign organisers, thanks to Grant’s investigations, for example, and we also know that the site’s origins lie in fundraising for a bachelor party, where sex workers and alcohol (two violations of the terms of service) were present.

What’s drawn people who don’t normally organise with sex workers to the cause? It may be the simplicity and clarity of this situation: Eden Alexander was an ordinary working woman who contracted a very serious medical condition, and when she tried to fundraise for help, the funds were taken away. This seems like a clearcut case that’s easy to get behind; who could find fault in being outraged about a situation where someone with mounting medical and personal care bills needs help and can’t get it?

However, it’s notable that there’s a shift occurring in the coverage of this case. The voices of the sex workers who started the campaign to get justice for Eden Alexander are receding to the background and being replaced by those of the progressive and liberal people who took up the case, identifying themselves as sex worker allies.

Yet, where are those allies for cases with more gray areas, and significantly more complexity?

When members of progressive movements do choose to work in solidarity with sex workers, it often seems conditional—they need to be the “right” kind of sex workers, and they need to be experiencing the “right” kind of difficulties. A sort of moral judgement is passed on sex workers and their profession, and while it’s not the same kind of judgement WePay just passed on Eden Alexander, it’s no less biting. To selectively apply the acknowledgement of humanity and basic dignity of sex workers is no progressive move.

Sex work Twitter was there long before progressive organizers, and it will endure long after they’re gone, leaving their hashtags and protest signs flapping in the street behind them.

Photo via petesimon/Flickr (CC BY 2.0)