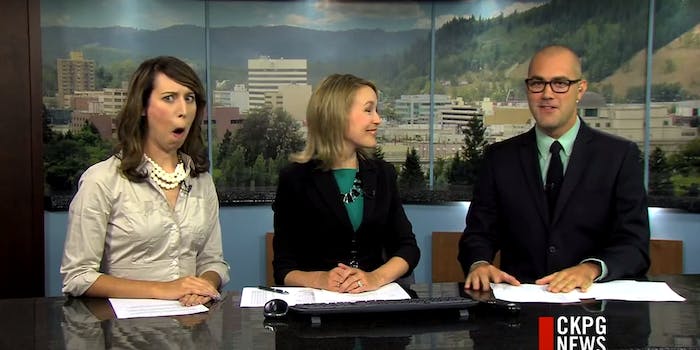 It's comedy gold—and some good advice.

TV broadcasters are complete professionals, but even they aren’t above a good butt joke.

After CKPG anchor Aileen Machell read a report on the first lettuce grown in space and explained the larger implications of NASA’s future mission to Mars, sports reporter Rich Abney tried to comment on it with a witty pun. It was a pun familiar to space enthusiasts, pun lovers, and everyone whose minds are still in the gutter.

Abney’s got a point, though. Uranus is one of the gas planets; it has a gaseous, liquid, and icy atmosphere instead of one made of anything solid. Growing lettuce wouldn’t be advisable on the surface of a planet about which we know so little.

Camille MacDonald’s follow-up, while keeping with the theme, paled in comparison. And considering what she was talking about, that was pretty surprising.