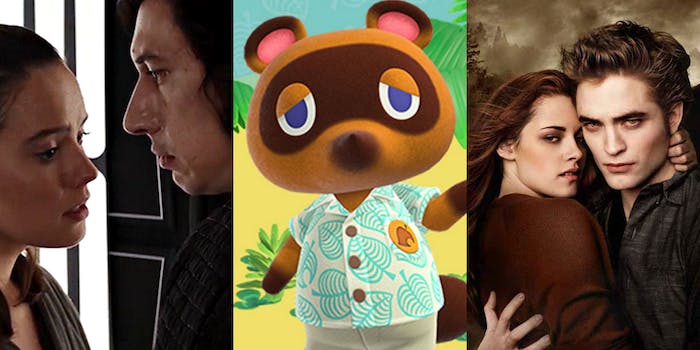 Much of Tumblr's Year in Review was dominated by older titles.

Earlier this week, Tumblr released its annual Year in Review package, which showcases what its users have been discussing and searching for over on Tumblr the past year, and if you’ve been indulging in comfort and nostalgia, it turns out that you weren’t alone.

In a year when several of 2020’s major blockbusters—including Black Widow and Wonder Woman 1984—were sidelined because of the COVID-19 pandemic and others went to streaming, many Tumblr users largely looked toward older movies and franchises alongside the films that were released prior to the pandemic. That’s reflected in the list of top films, which includes everything from The Rise of Skywalker and Birds of Prey to Lord of the Rings and Twilight. Star Wars, in particular, had a stellar year on Tumblr, at least from a numbers standpoint.

Because Tumblr strips its data of user sentiment, it doesn’t know exactly how much of the posts and searches surrounding TROS or Reylo (which was the only heterosexual ship out of Tumblr’s top 10 ships) were positive or negative. But its stronghold over Tumblr’s Year in Review scope—which spans from Oct. 21, 2019, to Oct. 20, 2020—early on isn’t too surprising: Despite its 2019 debut, people couldn’t stop talking about Star Wars.

“Star Wars is one of those things where it’s such a massive property that it touches everything,” Amanda Brennan, Tumblr’s trend expert, told the Daily Dot. “Whether or not you’re in the fandom or tangential to the fandom, you’re probably going to be talking about it, to see what’s going on in the conversation. Searches count as well, so people are searching for it, and I feel like Reylo is one of those things that even if you don’t watch Star Wars, you probably have an opinion on it because it’s so polarizing.”

But much more of Tumblr’s Year in Review speaks to the current moment. Much of Tumblr’s lists were dominated by escapism and meaningful ways to connect. Brennan noted that while for most years, the most dominant thing on Tumblr was a show or movie, this year’s top entry in Animal Crossing was supreme because it “gave us this way to connect in a world when couldn’t really connect physically.”

You also have the reappearance of older properties emerging as top trends. Titles such as Animal Crossing and Lord of the Rings both tie into the now-popular cottagecore aesthetic. But with Tumblr’s younger audience (48% of Tumblr users are part of Gen Z), quarantine gave them a chance to explore something they might’ve missed when it aired, like Avatar: The Last Airbender, which was one of the most popular things on Tumblr in the past year after the show became available to stream on Netflix.

It also gave people the opportunity to reevaluate media they might’ve once written off or are now starting to embrace. Twilight is chief among them—and not just because of the publication of Midnight Sun in August; Tumblr noticed a spike in discussion around Twilight as early as March. And it’s not just from people making fun of Twilight.

“Something that’s a throughline of this year is rejecting cringe culture and being like, ‘screw it, I like Twilight and…I don’t care what people think, this is my comfort movie. I need my emotional support sparkly vampire,’” Brennan explained. “And I think that as we all were all forced to be at home with ourselves and to really start thinking through, ‘Oh, what are my values? Who am I at my core? You know what? If it’s Twilight, it’s Twilight and this is something that makes me happy.’”

For some people, comfort can come from what we already know. While some people like to turn toward escapism to find comfort in the uncertainty of the world, others lean more on existing dystopian stories; at certain points this year, it wasn’t hard to find sentiment online that we were living in a young adult dystopian novel. For example, Divergent, which came out in 2011, was one of Tumblr’s top books in 2020, and Suzanne Collins’ Hunger Games prequel wasn’t far behind.

As it turns out, there’s some comfort in revisiting a story where you already know the ending.

“Right now, we’re in a world where a major news event happens every two hours; it feels overwhelming,” Brennan explained. “We’ve seen so many posts being like, ‘Can we get out of this unprecedented time now, or this moment of history?’ And going back to these dystopian stories, you know what happens, there’s an ending, characters get through it.”

But as Brennan put it, there’s really a throughline how we choose to escape with our exploration of fantastical stories.

“And it’s the same thing with fantasy,” she added. “[The characters are] going through all of this weird stuff and they make it through mostly safely. So to have that kind of story where you can kind of escape the world a little bit but it’s still similar and you don’t feel as alone in this time where you can feel really isolated.”