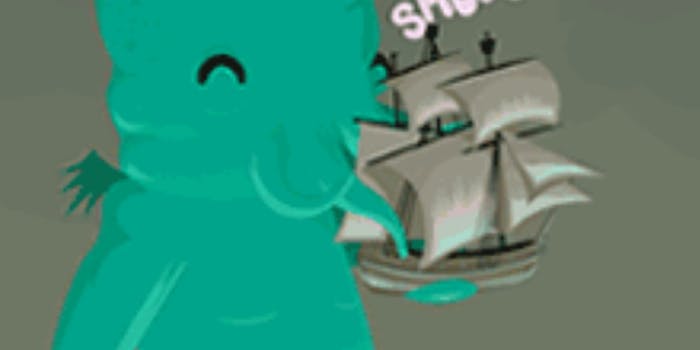 For more than 100 years, artist-in-residence programs at colleges, museums, and municipalities have allowed artists to immerse themselves in a new community to create original works and build their portfolios.

In September, that opportunity was offered to Roger Biersborn by one of the biggest art communities in the world: Tumblr.

In 2012, the blogging network made the top 10 list of the most visited sites in the world, thanks in part to more than 20 billion posts. More recently, “Tumblr” surpassed “blog” as a more popular Google search time. Both feats are symbolic of the site’s towering online presence, boasting a staggering 83 million blogs that run the gamut from celebrity accounts to daily comics.

“It’s brought this art out of its hole in the Internet,” featured artist Lacey “lulinternet” Micallef told the Daily Dot at the launch party in August. “It has a much larger audience now.

As Reblorg’s first artist-in-residence, Biersborn had to create two pieces of original works of art per day for one week.

“That’s a good amount of content to do in a short amount of time,” Biersborn recalled. “It forced me to do some stuff I wouldn’t have done otherwise.”

The result was 10 bright, smooth looping animations that look as if they could have been stripped from cartoons like Scooby-Doo or anything on the Adult Swim channel. Biersborn took about four hours to create each static image in Adobe Illustrator before dragging the finished product into Photoshop to animate it as a GIF. The deceptively simple GIFs cover a wide range of subjects, from a shark poking its head out of water to a cute cupcake throwing up, the latter inspired by  Micallef sugar-coated GIFs.

In total, Biersborn’s Reblorg GIFs collected 16,000 notes, Tumblr’s method of approving posted content. His GIF of the shark also was featured on Tumblr’s radar, a tool used by the company to highlight interesting content from around the network and to promote ads. He also netted more than 100 new followers.

A high school teacher in West Lakes, Calif., Biersborn’s quirky sense of humor was informed in part by the cartoon Adventure Time, which follows Jake and his magical dog Finn as they travel through the post-apocalyptic land of Ooo. When he’s not in the classroom, Biersborn plans to continuing to make GIFs for art’s sake and for companies like MTV.

“It’s cliche to say it but it’s really something I just enjoy doing,” Biersborn added. “I don’t buy into serious art. I don’t like the pretentious stuff. I like things that are more simple and lighthearted.”