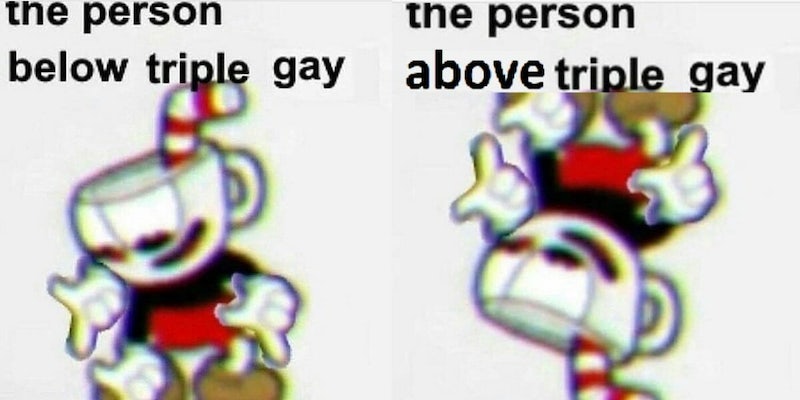 What does it mean to be Triple Gay, anyway?

This new meme, starring the protagonist from the popular game Cuphead, looks offensive at first blush. And maybe it is, but there’s a lot more going on here. Let’s take a look at where “triple gay” came from and what it means.

“Person above me” memes have been around for some time.  It’s an old messageboard tradition to mock the poster who comments above or below you, especially by calling them gay, and it seems to have blossomed even further on social media. In one famous Facebook status that makes fun of the trope, a man writes that the first person to comment is “gau,” then becomes the first to comment by correcting his own typo. Oops!

“Above” or “below” images are a longstanding online trope, but the ‘Triple Gay’ meme adds two things to it: one is Cuphead, a popular and somewhat controversial game. Cuphead is very au courant in meme circles, which gives the meme a little viral oomph. The second is that the “triple gay” insult is tongue-in-cheek and might even be read as a meta-commentary on the practice of using “gay” as a slur online.

Insulting people and things as “gay” is a regressive practice associated online with 4chan trolls, YouTube gamers, and tweens who still find bad language thrilling. 4chan’s use of the suffix -fag is a boring remnant of a time when this was still edgy. In 2017, the internet is generally more open to sexual identities and orientations other than straight, cisgendered, and vanilla. This is especially true on Tumblr, where you’ll find supportive communities for everyone from trans folks to furries to all manner of “otherkin.” Just being gay is hardly worthy of comment on Tumblr … which is probably why “Triple Gay” plays so well there.

Adding the “triple” just highlights how absurd “gay” was as an insult to begin with. In fact, some people are proudly owning being “Triple Gay,” using the meme to discuss coming out:

Of course, it could also be valid to apply a more straightforward reading of “Triple Gay” and conclude that it’s a bad, dumb, and homophobic meme. It all depends on how it’s used in context.

In one gaming chat on Discord, for example, it apparently shut down the conversation for three days because no one wanted to be Triple Gay. (This story is probably not literally true, but it’s funny.)

In a Discord where noone has posted in the main chat since last friday because someone posted this in it. pic.twitter.com/RuR4NQkQO9

It’s not entirely clear where Triple Gay started, but the very good Tumblr account Meme Documentation reports it started on Instagram before it blew up on Tumblr. “Triple Gay” has also been mashed up with older memes, like the anime meme “Omae wa mou shindeiru (you are already dead)”

or the Richard Dawkins t-shirt meme:

The old “I diagnose you with gay” meme has also been upgraded to “Triple Gay”:

Perhaps the most interesting thing about the meme is the interplay between the original three-armed Cuphead (“The person below”) and the upside-down version (“the person above”).

What does it mean when the two opposite Cupheads meet?

Well, it depends on which order you put them in. As Tumblrer Trillizard420 put it

“the Cupheads can either make each other triple gay

or make everyone around them triple gay, protecting each other from the triple gay

what choice you make tells a lot about you.”

Indeed, this meme does.