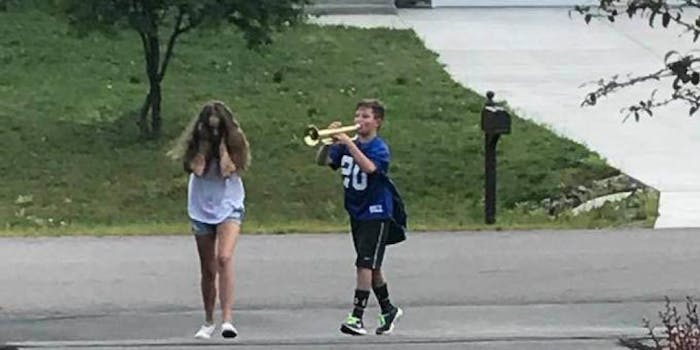 We are all the annoying kid with the horn.

Social media in 2018 is a struggle for attention, whether you’re posting political tweetstorms, eating laundry pods on YouTube, or dropping a new track on SoundCloud. And sometimes we don’t feel heard, like we’re not getting the attention and empathy we deserve. In a sense, we’re all Trumpet Boy.

Trumpet Boy is a viral image of a young boy playing his horn at a girl who’s covering her ears and attempting to walk away. He’s an obnoxious character, but people can definitely relate. Often found on Twitter, Trumpet Boy is part of the growing field of “object labeling” memes, where objects or characters in a funny photo stand in for other concepts. In this one, Trumpet Boy is often labeled “me,” and the girl in the photo is someone you wish would listen to you.

Maybe you want to talk about your depression.

Or your Minecraft obsession.

Anything you want to say that others don’t want to hear can be your metaphorical trumpet.

If you need further evidence, consider that this tweet has more than 200,000 combined likes and shares.

has any picture summed up Twitter as well as this one pic.twitter.com/zoK9XfLw1I

Toot on, Trumpet Boy. You’re not the mascot 2018 needs—but you’re the one it deserves.