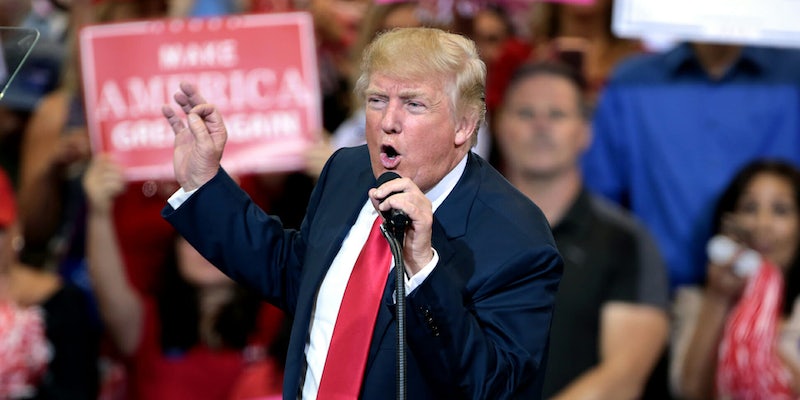 President Donald Trump continued to rail against the use of windmills to provide energy on Thursday night.

The president told a crowd of supporters in Michigan that wind-powered energy is not be a sustainable form of energy. As Trump sees it, if the wind isn’t blowing, it would lead to power outages.

This isn’t the first time that the president has asserted that wind energy wasn’t viable because it only blows “sometimes.” In fact, he brought up the same no-television scenario earlier this month.

During an interview with Fox News pundit Sean Hannity this week, Trump dreamt up a similar situation.

“Look at the fact that we would have been powered by wind—which wouldn’t have worked by the way, because it only blows sometimes and lots of problems come about,” he told the Fox News host.

The president still believes that wind power is not a viable energy source because "it only blows sometimes" pic.twitter.com/UgTzygyN35

Trump’s assertion that he knows “a lot about wind” was mocked by people online.

“Windmills. Weeeee. And if it doesn't blow, you can forget about television for that night. 'Darling, I want to watch television.' 'I'm sorry! The wind isn't blowing.' I know a lot about wind."

I can’t wait until Thursday to hear my Environmental Writing class’s response. pic.twitter.com/Cfjz0XiqPr

"I know a lot about wind." says the guy who thinks he won't be able to watch TV if the wind doesn't blow.

“I know a lot about wind." -The blow hard in Chief

The Department of Energy’s website insists that the United States power grid is able to handle the scenario Trump talked about.

Trump, however, has had a long obsession with windmills. He dislikes them for numerous reasons, including how he believes they kill birds.