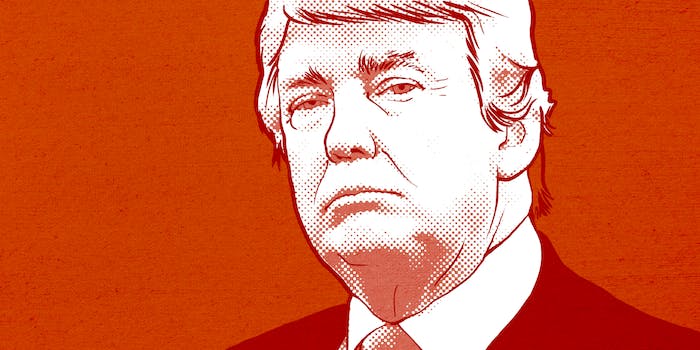 At a campaign stop at the University of Colorado, Trump was photographed holding two screaming babies—a photo that pretty much sums up the 2016 election. It’s almost too on the nose.

At one point before the rally, Colorado Springs’s fire marshal said the room was at capacity, and no more people were allowed in. You know, for safety reasons. Trump told supporters that this kind of oppression is why America is “going to hell” and accused the marshal of being a Clinton supporter.

You can see the lead up to this glorious event thanks to a video now posted on YouTube. He initially has one baby, but you can hear Trump say what sounds like, “Gimme the other one.” Chilling.

Trump seems to exude a confidence that borders on sociopathy, but perhaps we need to look deeper. The man who can be baited with a tweet has given us all the clues that there’s a sadness inside him.

A list of things Donald Trump believes are “sad,” according to his Tweets: pic.twitter.com/tFS9xsETs0

This is basically the new “We Didn’t Start the Fire.”