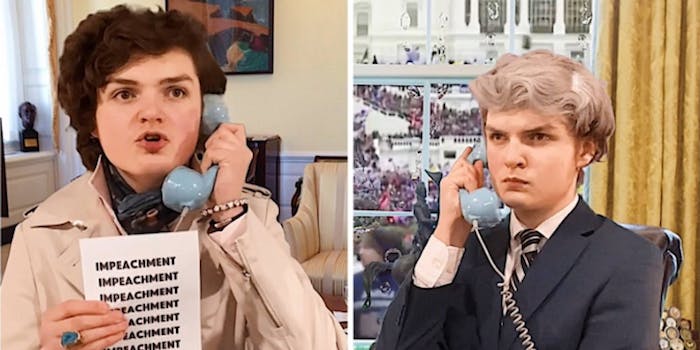 Meet the British TikToker turning U.S. politics into a musical

'Our politics are nowhere near as interesting.'

Horrified and fascinated by the political situation in America over the last few months, British TikToker Henry Patterson has reimagined events through the lens of musical theatre. Taking songs from famous musicals with a political bent, like Les Misérables and Hamilton, Patterson’s songs are by turns witty and strangely informative for those not entirely clear on the chain of events that led to the storming of the U.S. Capitol on Jan. 6.

Though the first of his political-theatre TikToks simply involved Patterson dressed in his normal clothes, singing a Hamilton parody in front of a green screen, things swiftly got a lot more elaborate. Patterson, 17, began dressing up as everyone from Former Vice President Mike Pence to House Speaker Nancy Pelosi (D-Calif.).

Patterson’s TikTok bio offers up only an “Idk why” on the matter of his writing and performing parody songs about American politics, but the Daily Dot got him to elaborate a little further. “As a Brit, our politics are nowhere near as interesting,” Patterson said, adding that after listening to BBC’s Americast podcast about the first presidential debate, he was “so in shock at the carnage that unfolded on stage.” He then began uploading some parodies involving his favorite musical, Hamilton, to his personal Snapchat account.

Friends persuaded him to put his musical political parodies on TikTok. His initial video about the 2020 U.S. presidential election—which now has more than 780,000 views—led to requests from commenters to create a series. And Patterson did just that. He’s uploaded more than two dozen videos about American politics, touching on topics like Bernie’s viral mittens and Donald Trump’s second impeachment trial.

Most people, Republican TikTokers included, have responded positively to Patterson’s content, but there’s been some dissent. Most of the negative comments have been along the lines of the often-repeated Trumpian claim of “fake news,” but there’s also been some humor in the comment section too, with remarks like, “I thought we got rid of you in 1776” and “pack it up, Redcoat,” which Patterson said have made him laugh.

The one thing Patterson said he cannot understand at all is “how even after the insurrection at the Capitol on Jan. 6, there are still people and politicians willing to stand by Trump.” However, he remains hopeful about President Joe Biden and Vice President Kamala Harris’ tenure, saying, “President Biden has his work cut out to reunite the states but I’m hopeful that in time, he and Vice President Harris will manage to do just that.”

As for Patterson himself, he’s hoping that his TikTok fame will lead to something more.

“It would be a dream to have some of my songs feature on TV or podcasts, he said. “Maybe the White House press briefings will start to be given through the medium of song from now on.”

He’s also planning on branching out from politics with parodies about other topics. But right now, he’s still having fun making music about the Trump era.