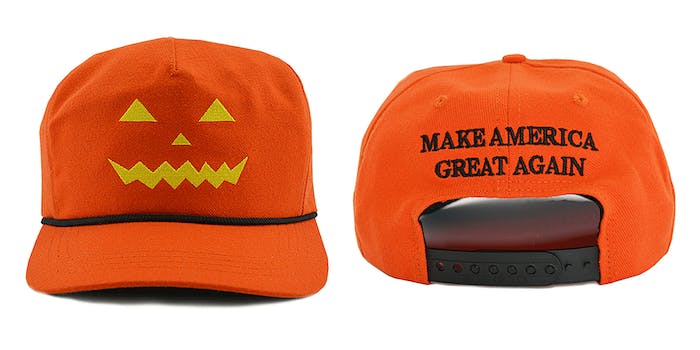 Living in America in 2017 is often terrifying and unpredictable. If you need yet another visual reminder, President Trump’s official website is now selling on-brand merch! A Halloween baseball cap, which is currently sold out, features a jack-o’-lantern on front and the slogan “Make America Great Again” on back.

It's Trick-or-Treat time and this MAGA hat is definitely a treat! Order by Oct. 23rd to get it before Halloween: https://t.co/YQYZ0puyyw pic.twitter.com/644CZmtmtv

The pairing of the slogan and an image meant to frighten people is (likely?) unintentionally frightening, and the internet was quick to roast the $45 baseball cap.

People made comparisons between the orange jack-o’-lantern and Trump’s skin color.

You… made a Trump hat… featuring… an orange ghoul? 😂https://t.co/XRAfc0oW4Y

LOLOLOL – is that a joke? You made an orange MAGA hat?! Is that donald? You all are the least self-aware bunch I've ever seen.

you guys nailed the color 👏🏻 pic.twitter.com/NjOa7D3Btl

The products available on Trump’s site are perhaps a little too on-the-nose.

You can't make this shit up pic.twitter.com/YR6IHkAYqu

Coincidentally, the cover for next week’s New Yorker bears a resemblance to the baseball cap.