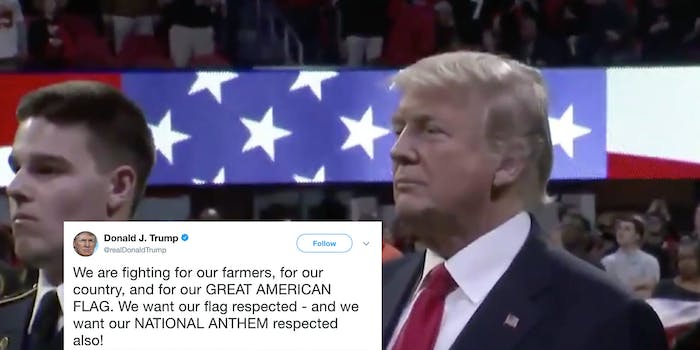 Trump demands respect for the national anthem—then forgets the lyrics

If it's such a big deal, why didn't he learn the words?

Ahead of the biggest game in college football on Monday night, President Donald Trump tweeted to demand respect for the national anthem. A few hours later, he appeared to forget how to sing it.

Trump’s tweet included a video of himself speaking in defense of farmers, the American flag, and “The Star-Spangled Banner.”

“We want our flag respected – and we want our NATIONAL ANTHEM respected also!” Trump wrote, no doubt referring to athletes’ national anthem protests against police brutality.

We are fighting for our farmers, for our country, and for our GREAT AMERICAN FLAG. We want our flag respected – and we want our NATIONAL ANTHEM respected also! pic.twitter.com/16eOLXg6Fi

Not only was he booed on the way in, but Trump also appeared to botch the lyrics to the national anthem. He hardly moved his mouth to the second line of the song. (It goes like this: “What so proudly we hail’d at the twilight’s last gleaming.”)

Trump doesn’t know the words to the anthem?? pic.twitter.com/NkGI95hX6c

Trump didn’t appear to know many of the words to the anthem at all. At some points, he stopped even pretending to sing.

People on Twitter pointed out the irony of Trump forgetting the words to the national anthem after so adamantly demanding respect for it.

he kinda made a big deal out of honoring the national anthem tho, and he doesn’t bother to learn it?

The man CLEARLY does not know the words to the National Anthem. This is indisputable.

All of that hate he has spewed toward Black folk about taking a knee and the man doesn’t know the words.

“All of that hate he has spewed toward Black folk about taking a knee and the man doesn’t know the words,” King wrote.