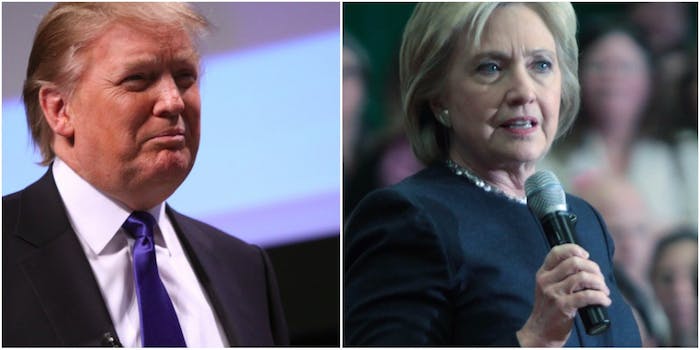 Trump says farewell to Bannon, but not without taking a shot at Hillary Clinton

This morning, 284 days after defeating Hillary Clinton in the 2016 presidential election, President Donald Trump took one more shot at his defeated foe.

It came, of all places, in his farewell wishes to departed adviser Steve Bannon. Bannon reportedly resigned on Aug. 7, but news only broke Friday afternoon.

This morning, the president tweeted his thanks to the man frequently credited for his general election victory. It also contained a not-so-subtle reference to his opponent.

I want to thank Steve Bannon for his service. He came to the campaign during my run against Crooked Hillary Clinton – it was great! Thanks S

Despite being the leader of a nation with myriad economic and social strife, Trump, 230 days into his presidency, is still obsequiously obsessed with his election victory and his vanquished Democratic rival. He mentioned his victory while talking about the death of Heather Heyer this week, and it’s the third time he’s used that moniker for Clinton since he took office.

Bannon is also considered the architect of Trump’s infamous travel ban, which Trump tweeted repeatedly about the need for yesterday. He did not thank Bannon for any of his work surrounding that, and reports claimed Trump disliked the way the media portrayed Bannon as an outsized force in the White House.