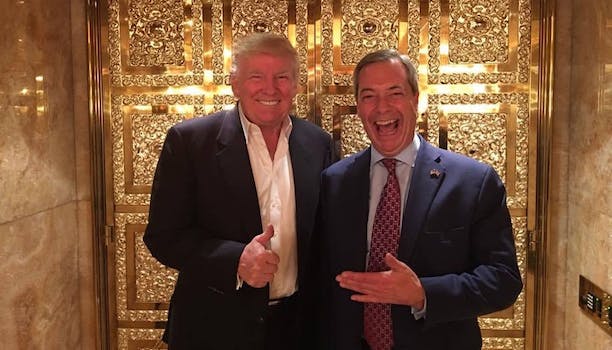 Building castles in the sky and making Mexico pay for it.

Cozy buddies President-elect Donald Trump and Brexit leader Nigel Farage, both of whom could plausibly call themselves “Mr. Brexit,” met at Trump’s golden apartment shortly after the U.S. election and seemed to get on swimmingly. Let’s check in on the blossoming bromance between the two smirking faces of the global crackdown on immigration:

Hoo boy. In this mashup from Sky News program The Pledge, they’re singing about rainbows and castles in the sky. One question comes immediately to mind: When they build those castles, who will Trump try to stick with the bill?

Not everyone is horrified by the amazing auto-tuned nationalist leaders, though. This cringeworthy (but very well-produced) duet got a big boost after Breitbart London’s Raheem Kassam tweeted it with the caption “THIS. IS. EVERYTHING!!!”